Civil rights attorney Dan Siegel laid out a distinctively progressive platform as he formally announced his candidacy for mayor of Oakland today. Standing at what was once the main entrance to the Occupy Oakland encampment nearly three years ago, Siegel said his campaign aims to make the city safe — not by adding additional cops, but through economic equality, social justice, education, and public privacy.

“These are big thoughts,” said Siegel in front of more than one hundred supporters at Frank Ogawa Plaza Thursday morning. “So how do we get there?” Siegel often had pointed remarks in response to some of the worries many progressives in the city have raised over the past few years regarding the conduct of the police department, crime, and the controversial citywide surveillance hub, known as the Domain Awareness Center (DAC), which is supported by the mayor and city council. “If we are successful, the DAC closes the next day.” he said to applause. He later derisively labeled the DAC, “the local branch of the Justice Department, the NSA, and the FBI.” 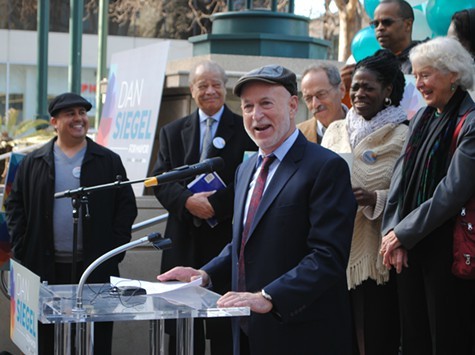 In what certainly will become a hotly debated campaign issue, Siegel called for an immediate increase in the city’s minimum wage to $15 per hour. The tough-talking attorney noted the proposal’s potential for becoming a hot-button issue, saying, “There are some controversial parts to this and I’m not going to shy away from controversy.”

Siegel, a former Oakland school board member and former advisor to Mayor Jean Quan — the person he now wants to replace — chastised a number of recent mayors who all proclaimed that they intended to work with the city’s struggling school system, only to never fully follow up on the promise. He vowed to meet each week with the superintendent of schools and keep schools open at night and weekends, and ultimately turn them into community centers. In addition, he proposes funding education for three- and four-year-olds. “Quality pre-school programs have shown to be the greatest and most effective thing we can do to level the playing field between children from affluent backgrounds and children from poor backgrounds and it’s time to do that.”

He is the fourth announced candidate to enter race to unseat Quan this November. Port of Oakland Commissioner Bryan Parker, university professor Joe Tuman, and Councilmember Libby Schaaf entered the race in recent months with platforms primarily focused on public safety and additional police officers. But none, thus far, have offered the type of red meat progressive stances put forward Thursday by Siegel.

Siegel also touched on growing progressive concerns such as growing gentrification, food security, and disproportionate numbers of young black men in jails. Long a critic of the Oakland PD’s history of misconduct, Siegel urged for a police chief “with the guts to give orders that citizen abuse has to stop.” He added, “We need safety for our men of color to be safe from racial profiling, gang injunctions, stop-and-frisk campaigns, and curfews. We need safety from malnutrition and diabetes and a diet that is rich in Big Macs and Cokes.” Furthermore, he called for more community gardens in Oakland and greater access to fresh food. “We need to make sure we have grocery stores not only in Montclair,” Siegel said, “but everywhere so people can get healthy, nutritious food at reasonable prices.”

Nevertheless, Siegel described his campaign as a work in process and dependent on the success of his supporters. “My theory about change is that the people make history,” he said, “Not leaders, not government.”