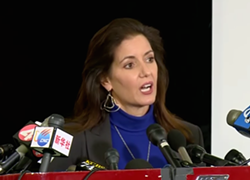 Acknowledging that in the aftermath of the Ghost Ship fire some property owners have evicted residents of warehouses and other unpermitted living spaces for fear of legal liability, Oakland Mayor Libby Schaaf today issued an executive order meant to help landlords bring buildings up to code, while hopefully avoiding displacement of tenants.

In recent weeks there have been numerous reports of tenants being evicted from warehouses and other unpermitted types of housing across the East Bay. Other arts and culture spaces, where people don't live, have also been targeted for strict code and zoning enforcement.

Some in the arts community have responded to these stepped up code enforcement efforts by burrowing further underground into hidden spaces, hoping city inspectors and landlords won't find them. Others have tried to raise money and donate materials and know-how to make unpermitted spaces safer. And still others have called on cities to issue a moratorium on evictions and pass other legislation that would prevent displacement.

Schaaf's executive order states that if unpermitted housing is identified by the city, the landlord will be made to enter into a 60-day compliance plan that includes:
Her order states that city building inspectors shall "generally work in the spirit of cooperation with property owners, tenants and master lessors to correct code violations that are not deemed to be an imminent life safety risk[.]"

Schaaf's order also calls for convening a Special Event Permits System Redesign group in order to revamp Oakland's much-criticized system for permitting music and performances. According to artists, Oakland and other cities in the Bay Area have bureaucratic and expensive requirements that drive performers into underground, and sometimes dangerous live/work venues.

Schaaf's order comes a day after the city council's Community and Economic Development Committee was supposed to hear a proposal from Councilmember Rebecca Kaplan to increase relocation assistance paid to tenants displaced due to code enforcement activities. That proposal was delayed, however, when a gunfight on Broadway interrupted the committee meeting.

The Oakland Warehouse Coalition, a tenants advocacy group, is pushing the council to consider an eviction moratorium from all types of housing due to code violations.

The full list of tasks included in Schaaf's executive order can be viewed here.