Oakland Debates Best Way to Watch Over Its Police Department 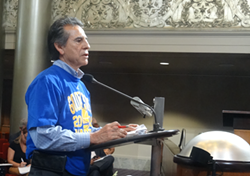 What's the best way to institutionalize and strengthen police reforms in Oakland?

Should the city create an independent, civilian-run police commission along the lines of San Francisco and Los Angeles? Or should there be a single new city official in charge of police oversight?

The city council is debating these questions right now before the backdrop of a still-unfolding sex misconduct scandal, and two other recent incidents that involved an alleged home invasion and assault by an off-duty officer and another Oakland cop brandishing his firearm at a painter in his apartment building.

On one side are councilmembers Dan Kalb and Noel Gallo, with a proposal to establish a strong police commission. On the other side are councilmembers Anne Campbell Washington, Abel Guillen and Larry Reid, who are proposing to appoint a new city official called the "Independent Police Monitor." One of the measures, likely with significant modifications, is expected to be placed on the November ballot.

"The keys in our proposal is to create a real police commission with independence and authority, while still having a certain amount of checks and balances," Kalb said today.

Kalb and Gallo have been working with a grassroots coalition of police-accountability activists for months on their measure. It would establish a full-independent police commission with the power to investigate police misconduct, impose final discipline on cops, hire and fire the police chief, and shape police policies and procedures. The commission would be fully independent of the city council and mayor.

Campbell Washington, Guillen and Reid drafted their opposing measure over the past few weeks, largely in response to the Kalb-Gallo measure.

"We think the full council should have some options to choose from," Reid said yesterday.

The Kalb-Gallo measure has already run up against opposition from the Oakland police officers' union, because it would eliminate binding arbitration from the police-discipline process. Under the current rules, police officers who disagree with discipline imposed on them by the police chief and city administrator can force the city into binding arbitration.

Although the discipline system appears to be improving, historically, Oakland has fared poorly in arbitration. According to the staff report accompanying the Kalb-Gallo measure, "there have been 15 binding arbitration decisions in police discipline cases since December 30, 2014. Of those 15 cases, only 7 resulted in the City's discipline being upheld and, in both cases in which the City terminated an officer, the City's discipline was overturned and changed to only a suspension."

At a recent city council committee meeting Zac Unger, an Oakland firefighter and union leader, called the removal of binding arbitration a "slippery slope" that his union would oppose out of concern that the city could eventually try to remove arbitration for other unions.

Kalb and Gallo responded by including an option in their measure that would allow the police to keep binding arbitration, but the arbitrators who hear appeals and make final decisions would be selected by the police commission. The Oakland Police Officers Association union would not be able to select any of the arbitrators, as they are currently allowed to do.

Councilmembers Anne Campbell Washington, Abel Guillen and Larry Reid's ballot measure would establish a new director-level staff position in Oakland city government called the "Independent Police Monitor." The monitor would have the power to make final disciplinary decisions in cases of police misconduct where the police department has recommended a punishment greater than five days suspension. The mayor would essentially select the monitor, and would have the power to fire the monitor, giving the mayor significant control over this system of police oversight.

The Campbell Washington-Guillen-Reid measure would also create a police commission but it would not have the power to determine what discipline to impose on police officers who violate department policies. Instead, the commission would investigate officer misconduct and make recommendations to the monitor. The commissioners would be nominated by the mayor and appointed by the council. All of the commissioners would be required to do annual ride-alongs with the police, and be trained by police officers in various police procedures.

A debate on the merits of both ballot measures has been scheduled for a special meeting of the Oakland City Council's Public Safety Committee on June 14.

Kalb said the measure introduced by his colleagues has some strong features. "Nobody has a patent on good ideas," he said. "We should mesh the things that can be meshed, and go with the primary measure that has the structure and big reforms that people prefer."