Oakland Councilmembers Question Police Overspending to Crack Down on Protesters 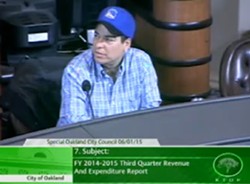 More protests against Mayor Libby Schaaf's nighttime street march ban are expected tonight and in the coming weeks. But so far the mayor hasn't budged from her position, and her actions could have serious implications for Oakland's finances. The city will likely have to pay millions of more dollars to keep protesters off the streets.

In fact, Schaaf's new ban, and its likely budget impact, was criticized by members of the Oakland City Council at a hearing held earlier this week.

According to the city's most recent revenue and expenditure report, paying police overtime to respond to protests is the main driver pushing Oakland's budget over authorized spending levels. Oakland over-spent its authorized 2014-15 fiscal year general purpose fund budget by $4.58 million. "The overspending is primarily attributed to sworn overtime costs associated with unanticipated protests," the report stated.

The total actual amount already spent by Oakland this fiscal year to have the police respond to protests is $7.03 million. The police department burned through another $15.69 million in overtime, largely to back-fill empty patrol positions or reimburse officers for other extra duties, for a grand total of $22.72 million in overtime already spent. And Oakland expects to finish the year at approximately $30 million in police overtime spending. However, much of the back-filling to staff regular patrols is offset by salary savings from unfilled staff positions. Therefore, it's mainly the overtime to follow and arrests protesters that has caused OPD to run up multimillion-dollar deficits — deficits that eat into other areas of the city budget. 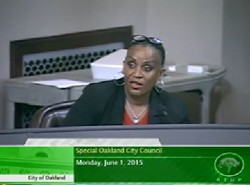 At special meeting of the Oakland City Council on Monday, the millions spent by police on protests came under fire from Councilmembers Rebecca Kaplan and Desley Brooks. The councilmembers questioned how over-spending on police overtime has been allowed to occur, who authorized the extra spending, and why policing protests has been elevated to the city's top budgetary priority, especially since the city has other critical problems, including 39 homicides this year for which there are too few investigators assigned.

There are numerous other public safety needs including hit-and-runs and traffic safety, gun violence, and human trafficking, all of which arguably impact more Oaklanders than disruptions caused by occasional street marches or vandalism that occur sometimes in conjunction with protest activities. Even so, the mayor — and previous mayors —  have decided that having lots of police respond to protests is the city's top priority, warranting expenditures beyond what was budgeted.

"We're not using vast sums of police overtime to catch murderers or gun dealers, or any other thing like that," said Councilmember Kaplan at the budget hearing. "And there doesn't seem to be any decision making process that any of us have any awareness of.”


"I think a part of the policy discussion needs to be not just the numbers, but some of the policies that some of the people other than the council have enacted. The fact that the mayor has imposed a curfew on peaceful protesters and made it seem as if they were out destroying our city, has caused us to have rolling demonstrations, because people should have a right to exercise their First Amendment rights. In terms of communities of color, had it not been for civil disobedience, had it not been for people protesting, we'd be in a different place. So if we are to have an honest conversation we need to have a conversation about the mayor imposing edicts which have an impact on the budget."


Kaplan followed up, stating that Schaaf's order to ban nighttime protests and the use of police overtime to enforce the ban appear to infringe on the Oakland City Council's role as the budget and policy-making authority for the city:


"We adopt a budget. No other department is allowed to over spend by 13 millions its budget. There is this one function in the entire city for which it has been allowed. And it's not just policing, because you don't have the police over-spend their budget to catch murderers and illegal gun runners, even though that might be useful. Someone and not the municipal board of this corporation, which is endowed with budget authority, has been making for years a decision to allow one department to overspend by millions for one function, and so who has authority to make that, under what basis, why for this one function and no other function is it legal to blow the budget by 13 million?"