The Oakland City Council is considering a major update to the city's Just Cause for Eviction Ordinance, which protects tenants from eviction — unless they fail to pay rent, violate their lease, or several other specific reasons.

But now there are two very different proposals in play.

Councilmembers Dan Kalb and Noel Gallo want to place a measure on the November ballot that, if approved by voters, would extend eviction protections to thousands more apartments in owner-occupied duplexes and triplexes. Currently, rental units in these types of buildings where the landlord lives in one of the units are exempt from the just cause ordinance.

There are 7,935 units in 3,662 duplexes and triplexes in Oakland, according to the city. Oakland Mayor Libby Schaaf's "Oakland at Home" report mentioned expanding just cause protections to these buildings as one strategy to stem displacement.

But Councilmember Lynette Gibson McElhaney has criticized Kalb and Gallo's proposal and offered her own changes to the just cause law.

The most significant feature of Gibson McElhaney's plan would drive in the opposite direction of the Kalb-Gallo proposal by removing eviction protections from potentially thousands of units that are in owner-occupied four-unit buildings. Currently, these types of buildings are covered by just cause rules.

At two city council committee hearings this week, landlords came out in force against Kalb and Gallo's plan, while tenants made a show of support.

Landlords said Kalb and Gallo's ballot measure is overly burdensome and removes the flexibility they need in smaller properties to maintain their finances and defend their homes from unruly renters.

One property owner, Norma Francisco, called Kalb and Gallo's ballot measure a "punitive measure" that "scapegoats" landlords. Another landlord likened just cause to a shotgun marriage between a landlord and tenant that would never allow for a divorce.

Other landlords said the proposal would harm seniors who buy duplexes and triplexes to secure their retirement. 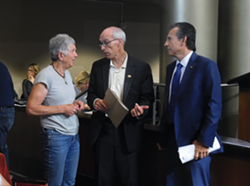 "My long-range plan is to have a caregiver living downstairs for my old age," said Linda Montauk, who resides in a duplex that she has owned for 28 years. "If this just cause ordinance goes through, it would prevent me from carrying out my plans, unless I take the downstairs apartment off the market the next time someone moves out, because I can't take the chance someone would move in for long-term and when I need it, it's not available."

But Rachel Gottfried-Clancy with the group Legal Services for Seniors said that the elderly are more often tenants who are displaced by landlords. She added that seniors who are evicted experience declines in health, and some end up homeless.

"It means that they're often at risk of losing their health, their wellness, and, in many cases throughout Oakland and other cities in the country, they're losing their lives," said Gottfried-Clancy.

After hearing testimony from dozens of tenants this week, Gibson McElhaney said she is especially concerned with how expanding just cause protections could impact Black landlords. "I am deeply troubled if we do this with a sledge hammer and not a chisel we'll see a replication of market forces that means a loss of Black ownership and Black presence in our communities," she said.

It's unclear how many duplexes and triplexes are owned by Black residents, but there are twice as many Black renters as homeowners in Oakland, according to the U.S. Census. By comparison, just over half of white Oakland residents own their home.

Kalb reacted with shock to Gibson McElhaney's announcement that she hopes to strip eviction protections from four-unit owner-occupied buildings.

"The one change we'll never accept is somehow bringing four-plexes into this law where they get the exemption," said Kalb. "I will not accept the idea of taking four-unit buildings and exempting those units going forward."
Prev
Next