Although support for Occupy Oakland has nosedived recently in the wake of violent protests, the Oakland City Council made a smart decision last night, rejecting a call for a police crackdown on future demonstrations. The proposed crackdown likely would have resulted in more violent confrontations between Oakland police and so-called Black Bloc protesters — which is exactly what the violent fringe of Occupy covets. 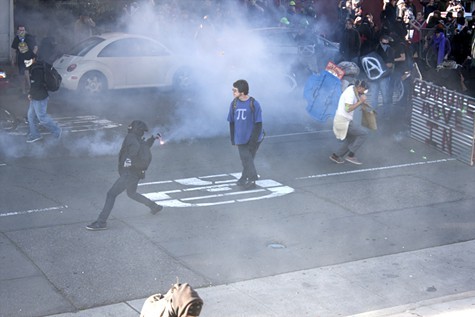 It’s become increasingly obvious over the past month that a hardcore group within Occupy Oakland relishes violent confrontations with cops. These mask-wearing protesters show up at demonstrations armed for violence, equipped with shields and packs full of objects that they can hurl at police. However, they usually don’t unleash their fury until police act first — either by firing teargas canisters or other less-than-lethal weaponry at demonstrators. It’s almost as if the Black Bloc protesters realize that if they were the first to attack, then they would be viewed within Occupy as the aggressors, a development that would prompt nonviolent demonstrators to finally shun them.

Instead, the Black Bloc protesters appear to prefer to make provocative acts toward police designed to trigger crackdowns, so that they then can claim that police are the true violent ones. In fact, when police hold their fire, remain calm, and allow protesters to march, demonstrations often turn out to be peaceful, like the one last Saturday. Indeed, during the February 4 Fuck the Police March, Oakland Police Chief Howard Jordan and his new command staff showed indications that they’re beginning to understand this dynamic.

But the crackdown proposal, sponsored by Councilmembers Ignacio De La Fuente and Libby Schaaf, would have forced Jordan’s hand. It would have effectively required police to use force against Occupy, and thus would have played directly into the hands of the Black Bloc. Jordan seemed to understand this, and Council President Larry Reid, the strongest backer of police on the council, did as well, when he refused to vote for the crackdown proposal.

It seems increasingly clear that if police hold their ground, remain calm, and refrain from striking first against Occupy, then the Black Bloc will lose steam. This group acts at times as if it’s whole reason for being is to battle police and turn downtown Oakland into a war zone. And if police — and the city — refuse to play this ugly game, both Oakland and Occupy may emerge from this struggle peacefully.