On December 3, also known as "Giving Tuesday," the San Francisco-based RE-volv raised $10,000 for a community solar energy project to be built at the Kehilla Community Synagogue in Oakland, ensuring the project is already about one-sixth funded. RE-volv is a nonprofit financial organization that uses crowdfunding campaigns to purchase and install solar photovoltaic energy systems for the benefit of other nonprofits, churches, and schools.

The Kehilla Community Synagogue, which counts about 350 member households, is RE-volv's second project. Back in April, RE-volv successfully raised money from more than 200 donors in 22 states and five countries to finance installation of a solar project on the rooftop of the Shawl-Anderson Dance Center in Berkeley. The Shawl-Anderson project is already generating electricity for the dance center's needs, and feeding electricity into the grid when the building isn't in use. 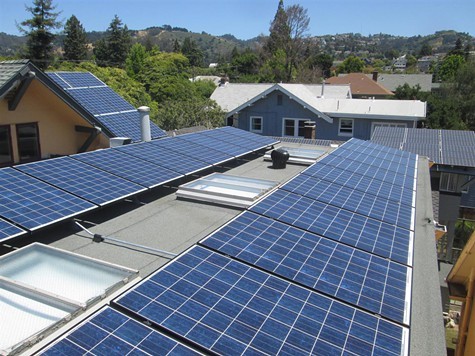 RE-volv's model of clean energy development is unique. Every project RE-volv builds contributes funds to future solar projects. RE-volv isn't a for-profit investor, and so in instead of siphoning off money from energy projects to pay dividends and interest, the organization can channel these dollars into new solar arrays. Andreas Karelas, RE-volv's executive director set the organization up two years ago with the vision that each solar project would generate a stream of revenue that over 20 years would finance the installation of three more solar projects. Those three projects would then finance nine solar arrays, and so on.

"This is exciting news for the Kehilla community as well as the planet," said Karelas. "The lease payments from this project will allow many more communities to go solar, multiplying Kehilla’s impact." When the Kehilla project is complete it will mean that RE-volv has effectively created two funding streams for the construction of about six additional future solar projects.

Once installed, the Kehilla solar installation will provide about 85 percent of the synagogue's electrical needs, saving the community $150,000 in energy costs over the 25-year warranty of the system, according to RE-volv. The community will also avoid the release of 18,570 pounds of carbon dioxide, 57 pounds of nitrous oxide, and 42 pounds of sulfur dioxide emissions each year of operation.

"We are so excited to be working with RE-volv to allow us to go solar and dramatically reduce our carbon footprint," said Rabbi David J. Cooper of Kehilla Community Synagogue.

Karelas added, "we're looking forward to working with many other faith-based communities and nonprofits in Oakland and the East Bay to multiply affordable clean energy."