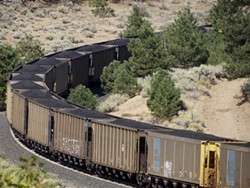 The Oakland City Council will vote on Monday whether or not to ban coal exports from a proposed terminal in West Oakland, but officials have yet to release a city-sponsored study on the project’s health and safety impacts.

Anti-coal activists are worried that the public and council won’t have enough time to review the study before its vote in four days.

“Instead of releasing the study ten days in advance, as is normal, they’re issuing it on the Friday before the Monday vote,” said Lora Jo Foo, a member of the No Coal in Oakland Coalition. Foo’s group originally asked that the study be made public on June 17 to give the public time to review it, and respond, but the city refused.

Another anti-coal activists, Michael Kaufman, said the process lacks transparency because the study has been kept secret until the last minute.

Assistant City Administrator Claudia Cappio admitted that the timeline is rushed, but said in an interview that the firm hired to do the report is working until the last minute in order to reach the strongest possible conclusions. She also noted that the legal requirement for the city is to disclose materials for special council meetings three days in advance, and the city is in compliance.

The $250 million Oakland Bulk and Oversized Terminal was conceived to replace a decommissioned Army base at the foot of the Bay Bridge. The project has been in the works for years, but the plan to export coal, revealed only last year, has received massive pushback from West Oakland residents, labor unions, and environmental groups.

Environmental Science Associates was hired by Oakland to evaluate whether the proposed coal terminal and increased coal-train shipments through Oakland — up to ten million tons of the fuel each year, according to city records — will cause pollution and pose a safety hazard.

ESA would not discuss the status of their findings with the Express.
A different health-and-safety study for the coal project has already been made public. Earlier this week, an independent panel of health experts released their own report, concluding that coal transport through West Oakland would increase the frequency and severity of health problems for residents and workers.

Foo said this independent study is crucial, because ESA does not have any public-health experts on its team. Foo and others believe that, if council members want to ban coal, they already have sufficient evidence to support their decision.

Coal boosters claim, however, that their project will be safe and clean. In several public hearings and on their website, Terminal Logistics Solutions, the company behind the plan, say that the train cars carrying coal to the terminal will be capped to prevent toxic dust from blowing into neighborhoods.

Coal opponents say that the plan further marginalizes already vulnerable communities that are subject to air pollution from overlapping industrial zones, three major freeways, and the adjacent Port of Oakland.

Data compiled by the Alameda County Public Health Department confirms that West Oakland residents are already disproportionately hospitalized for asthma, heart attacks, and cancer. And previous public health investigations indicate endemic inequity — 85 percent of West Oakland residents are people of color and over two thirds make up households earning less than $30,000 a year. Life expectancy for a Black resident of West Oakland is ten to fifteen years shorter than that of a white person raised in the Oakland Hills.

The developers have contended that the prohibition of coal in Oakland will only result in the project being built somewhere else, and that global carbon emissions from mining and burning coal can’t be stopped.

Kuiper disagrees. “Our investigation suggests that, if the coal’s shipment is prohibited in Oakland, it has a high probability of staying in the ground,” she said. “So, in this instance, Oakland has the opportunity to play a direct role in effecting widespread, positive change for the country.”

The controversial coal project has never been just a local issue. In May, the project’s developers struck a deal with the Utah: The developers pledged to serve as the state’s primary coal-export facility to overseas markets in exchange for funding. The arrangement is a strategic move for the state — who committed $53 million — as domestic demand for coal falters.

But conservation, health, and good-government groups penned a letter to U.S. Attorney General Loretta Lynch this past Monday, calling for a formal investigation into an alleged misuse of Utah’s public funds in sponsoring the Oakland terminal.

Their complaint? The $53 million was supposedly derived from a fund intended to “mitigate the adverse impacts of mining on communities,” according to the letter’s authors. But the group claims that the Utah state board responsible for the funds illegally loaned the money to a private investment banker to help finance the Oakland terminal — all to the benefit of coal companies.