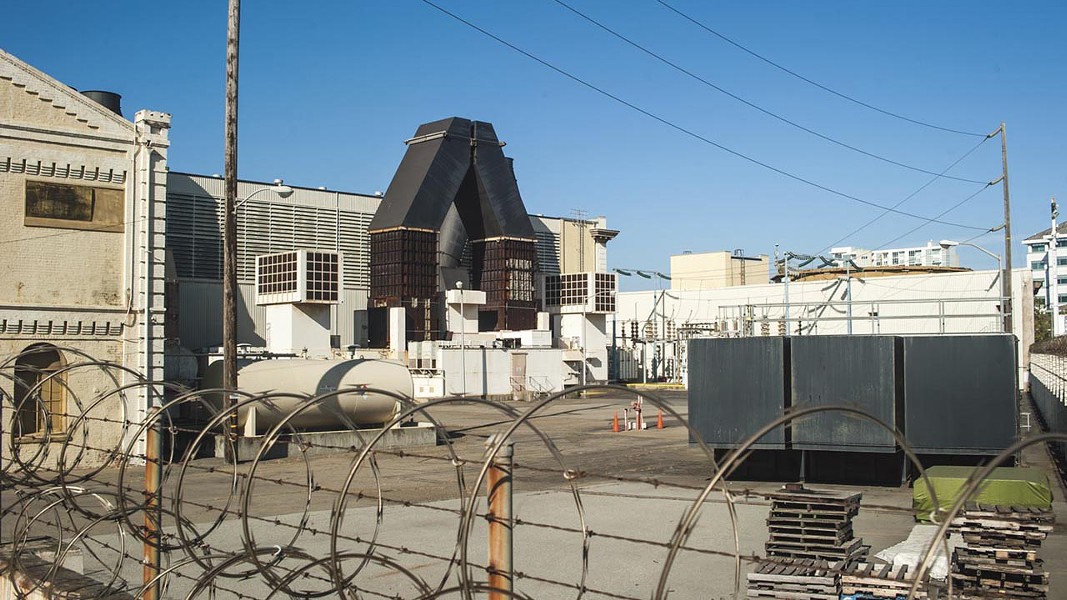 A new project in West Oakland and Jack London Square aims to achieve many goals at once: saving money, providing local jobs, fighting climate change, reducing toxic air pollution, and cutting electricity bills for hundreds of low-income households. East Bay Community Energy, the region's new clean energy provider, recently signed contracts with three companies to deploy an array of new batteries that will replace a jet-fuel-powered "peaker plant," which is now fired up when the demand for electricity is unusually high.

Under one of the contracts that make up this so-called Oakland Clean Energy Initiative, the residential solar electricity provider SunRun is planning to install small batteries in more than 500 low-income households in and around Oakland. SunRun's Shane Levy said the deployment will prioritize West Oakland, a neighborhood with a legacy of poor air quality. His company will install the batteries, along with solar panels, using a state subsidy program, Solar on Multifamily Affordable Housing, to help underwrite the cost. That program requires that savings from the solar panels are passed on to low-income tenants, reducing their electricity bills. East Bay Community Energy spokesperson Annie Henderson called the program a "first-of-its-kind project that is really pushing the boundaries on innovative and distributed energy."

The contract with East Bay Community Energy will help pay for the batteries, which will form a "virtual power plant" that will feed electricity back into the system at times of peak demand. Anne Olivia Eldred, chair of the community choice energy program's Community Advisory Committee, said the SunRun project is an example of "how innovative our staff is being, creating new ways to envision people's relationship to power. It's phenomenal."

It's also significant as a "proof of concept," Eldred said. "It gives other localities something to point to, to say 'This does work.'"

West Oakland residents will not only get cheaper electricity, but cleaner air. Burning jet fuel releases toxic pollutants such as carbon monoxide, nitrous oxide, and ultrafine particles, all of which cause heart and respiratory problems. Pollution from burning jet fuel is very similar to the pollution from diesel trucks, already severe in West Oakland because of trucks serving the port.

Replacing the peaker plant "is an example of how we see community choice doing the right thing in favor of the local community," said Jessica Tovar of the Local Clean Energy Alliance. Her organization led a years-long battle to make East Bay Community Energy a new kind of community choice energy program, one that prioritizes local economic development and environmental justice. They refer to East Bay Community Energy as "Community Choice 2.0."

For the project to go ahead, Pacific Gas and Electric Company also must sign contracts with ESVolta and Vistra, the companies that will build the larger batteries that will provide most of the backup electricity, since PG&E still owns the wires used to transmit the electricity. Henderson said, "All indications are" that PG&E will also sign. Company spokesman Paul Doherty said PG&E has received multiple, competitive bids related to the Oakland Clean Energy Initiative and is "in the process of finalizing our decision."

In addition to replacing the peaker plant, new East Bay Community Energy contracts also will build five new solar- and wind-energy projects — for solar power in Fresno, Tulare, and Kern counties and wind power in Alameda County. The Fresno project also includes a big storage component. The new projects will save customers money by reducing the amount of electricity the power company has to buy on the day-to-day market, which is more expensive.

The Local Clean Energy Alliance opposed the Fresno project when it came before the board June 19. "We really want to see more generation of clean energy in Alameda County," Tovar said later. "We are opposing anything done outside the county." But she acknowledged that the system has some immediate needs that can't be completely met by in-county projects.

And Henderson said all the developers of out-of-county projects have committed to putting money into East Bay Community Energy's Community Investment Fund, which gives grants to community projects for energy generation, storage, and energy efficiency. In addition, all the new contractors have committed to high labor standards, another key goal of the community groups and unions that helped create the new utility. Developers of the projects in Fresno and Tulare counties have already signed project labor agreements and the rest have committed to using union labor and paying prevailing wages. "We're trying to deliver on all the promises," Henderson said.

The Jack London Square project is part of East Bay Community Energy's overall plan to provide local jobs and reduce pollution, especially in the most impacted communities. That plan got another boost last month when community groups persuaded its board to increase the funding for programs included in the "local development business plan."

The biggest share of the funding will go to vehicle electrification programs, which are important for air quality as well as the climate. East Bay Community Energy has received grants to support electrification of private cars. "There's a lot of money for personal EV programs," Tovar said. And in some places, like Marin, public programs are oriented toward encouraging people to switch to electric cars. But in Alameda County, Eldred said, most people can't afford electric cars. East Bay Community Energy's own funds will mainly go to promote electrification of "fleets" — the commercial trucks whose diesel fumes produce the most pollution, Eldred said.

The local development budget will also be used to building electrification, the Community Investment grant program, and "collaborative procurement" — a program to bring together customers who want to install solar panels to make bigger projects that can lower costs.