Instead of commissioning new works, the month promotes art events that are already integral to Oakland. 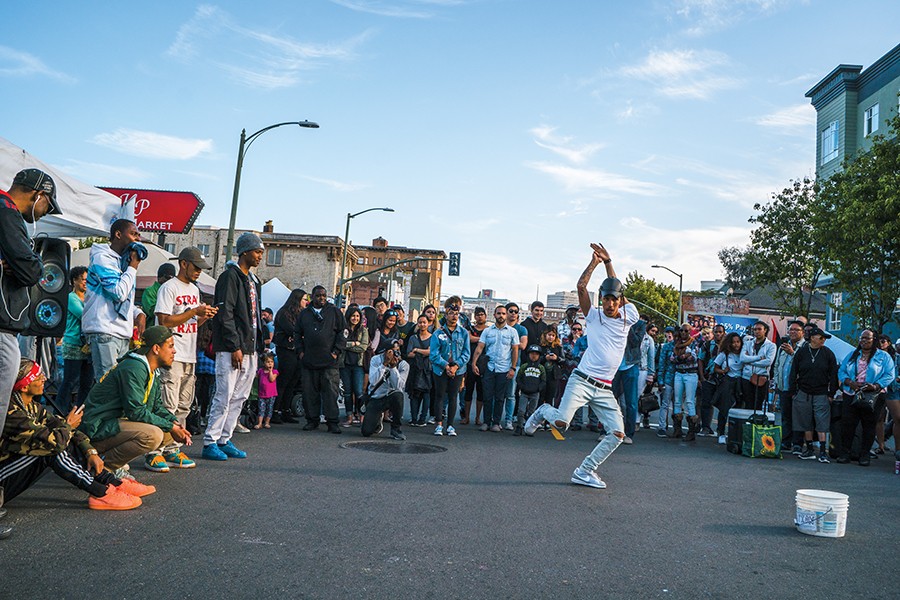 Oakland bursts at the seams with art, with public murals standing 10 stories high, countless galleries, First Friday, theaters, museums, and a bevy of parades and festivals.

He isn't lying. Residents of the city already know what's up when it comes to what Oakland has to offer. However, in an effort to bring attention to the East Bay's creative offerings to people not from the region, Visit Oakland is launching the first ever — and ideally annual — Oakland Art Month.

In the past, Visit Oakland has established the Oakland Ale Trail, sponsored the Black Joy Parade, and commissioned murals and performances around the city. At a whole month in length, this new venture sounds ambitious, but it was originally planned to be a bit humbler. The first conceptual iteration was for an Oakland Art Week, which would have consisted of several events hosted exclusively in galleries around town. The Visit Oakland team soon realized, though, that this would not suffice.

"The art in Oakland is so much more than what's in a gallery," Taylor said. "So, if we went with an event like that, a lot of the stories integral to the city's culture would not be told."

This is an important consideration given the ever-mounting pressure of gentrification pushing many artists and residents out of the city. Oakland Art Week turned into Oakland Art Month, aimed at ensuring the inclusion and elevation of multiple narratives of art. In line with this philosophy, most of the month's programming is not original. Instead, many established events have been brought under the umbrella of Oakland Art Month, promoted as featured showcases. To Taylor, it makes sense to place events that have grown organically within the city — and from the efforts of East Bay residents themselves — front and center.

The first featured event will be the First Friday street festival, the monthly Oakland staple, on May 4. The theme, "Art Is Woman," will focus on visual art, music, dance, food, and fashion created by women from around the Bay Area.

Oakland Art Month will continue to promote feature events throughout May, including the brand new TURFInc Cinco De Mayo Celebration, which will debut in Jack London Square with showcases of turf dancing (a style of dance developed in Oakland) and a variety of traditional and contemporary Latin dances. The Oakland Mural Festival will run May 12 to 19, during which Bay Area youth will partner with established muralists for weeklong residencies, culminating in the addition of at least nine new murals in the Jack London district. On May 19, the Malcom X Jazz Festival, an all-day festival that celebrates jazz and Black musical traditions, will hold its 18th annual celebration. These are just three of a reported 10 planned feature celebrations. A full list can be found on the Visit Oakland website.

In addition to the events, Visit Oakland has also incorporated an "artist spotlight" into Art Month. On the website, there is a section with photos and biographies of gallery owners, dancers, painters, musicians, and other creatives that in some way exemplify and add to the patchwork that is the Oakland arts scene. There is also a section of the site dedicated to various local nonprofits such as the Community Arts Stabilization Trust and Safer DIY Spaces that work to hold space for the arts community in the face of the housing crisis.

This added component creates a dynamism for Art Month. Although its primary purpose is to market the arts culture of Oakland to potential visitors, it is doing so in a manner that concurrently provides platforms for the people so integral to that culture as well.

"This gives us the opportunity to show visitors not just the art, but the organizations and artists behind it," Taylor said.