NRA Says It Will Sue Oakland Over New Gun Laws

The National Rifle Association and its state chapter, the California Rifle and Pistol Association, are threatening to sue the Oakland City Council to prevent implementation of new firearms safety laws.

Attorneys for the NRA and the CRPA notified the Oakland City Council in two separate letters dated January 4 that they intend to file lawsuits to stop implementation of the new laws. One would require firearms in people's homes to be secured in a locked container, or disabled with a trigger lock, while the other involves a citywide ban on gun magazines that can hold ten or more cartridges.

The Oakland City Council approved both laws on Tuesday at its regular meeting. Councilmembers also approved a new law that prohibits storage of unsecured firearms in vehicles parked on public streets.

"Adoption of such an extreme and unconstitutional law will result in litigation against the City to enjoin enforcement and have it declared invalid," attorneys for the gun lobbying organizations wrote in one of the letters sent to the council. The pro-gun groups argue that both laws infringe on gun owner's Second Amendment rights, and that both are preempted by state laws.

Councilmember Anne Campbell Washington, co-author of the laws banning high capacity gun magazines and the home gun storage rules, said she is confident that the new laws are constitutional and enforceable. 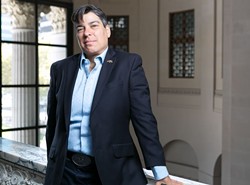 Mark Selmi, the chief public affairs officer with Michel & Associates, the law firm representing the NRA and CRPA, said that the pro-gun groups didn't take a position on the new city law that requires firearms stored in unattended vehicles parked on public streets to be secured. Regarding the other two new gun control measures, he said he could not comment on potential litigation.

Councilmember Rebecca Kaplan co-authored the law requiring secured storage of guns in vehicles. Kaplan said that Oakland won't be swayed by threats of litigation from the NRA.

"Congress just rolls over to them," Kaplan said about the lack of federal action on gun violence.

Campbell Washington provided the Express with a copy of a legal opinion from the Law Center to Prevent Gun Violence that supports the legality of the new laws. According to the letter, four California cities and the state of Massachusetts have enacted “safe storage ordinances” similar to Oakland’s new laws. The letter also states that between 2004 and 2015 approximately 300 firearms were stolen from vehicles in Oakland.

"We refuse to allow NRA lobbyists to dictate public policy," said Campbell Washington in response to the threat of a lawsuit by the NRA.