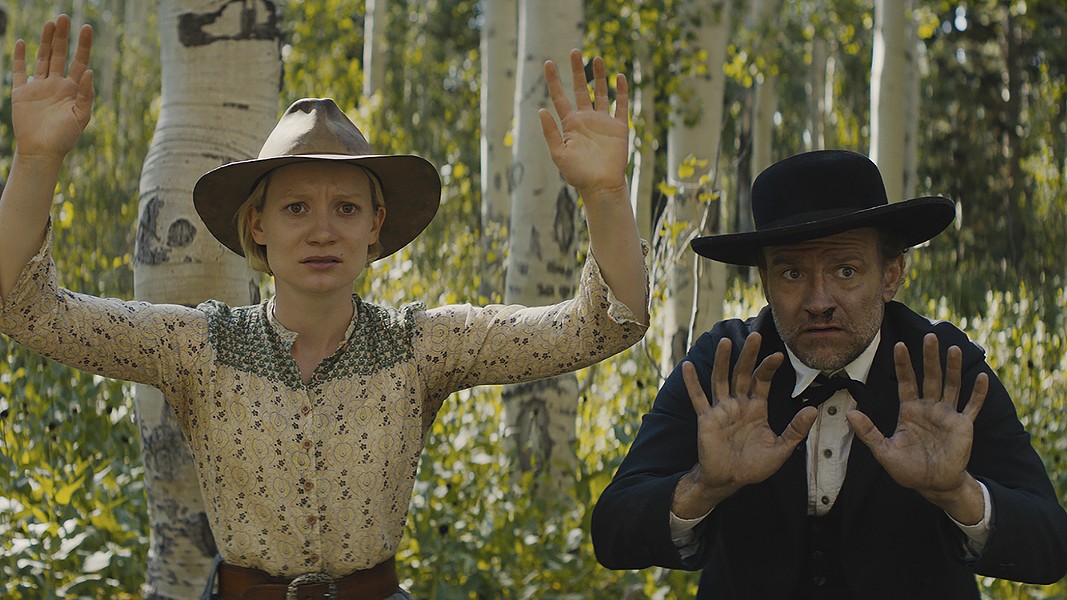 Damsel is one of those nouveau westerns that looks vaguely inspired by the Coen brothers — or perhaps Mel Brooks — in which eccentric Old West characters behave in anti-John Wayne ways and say things that would never occur to Clint Eastwood. That type of genre tinkering can be refreshing as long as the writing is sharp. Damsel's writing is not sharp.

Filmmaking siblings David and Nathan Zellner, who made the stranger-in-a-strange-land road trip Kumiko, the Treasure Hunter, know what it's like to be completely out of place. So when a chicken-hearted, whiskey-loving impostor of a preacher named Parson Henry (played by co-writer-director David Zellner) makes the acquaintance of fellow tenderfoot Samuel Alabaster (Robert Pattinson) on the trail of Samuel's bride-to-be Penelope (Mia Wasikowska), we're primed for suitably odd dialogue and awkward situations completely out of keeping with what we imagine as the Old West. The story is odd and awkward, all right, but so slowly paced, quiet, and ultimately predictable that we lose interest long before it grinds to a halt.

Westerns are supposed to be at least a little dangerous. Western parodies can make fun of that idea by coming across as silly and harmless. The Zellners' approach is to have every character, aside from the forceful Penelope, behave like the village idiot. The laughs are few and far between. Any time we have to ask, "Is this supposed to be a comedy?" we know something is dreadfully wrong. Parson Henry, Samuel Alabaster, a pair of ornery back-country brothers, a saloon full of grotesque townsfolk, and a befuddled Native American called Zacharia Running Bear (Joseph Billingiere) line up like a row of ducks in a shooting gallery, and disgruntled Penelope mows them down. We grow weary.

Aside from Robert Forster's nifty cameo in the opening scene, Wasikowska is the best thing about this dry well of a frontier tale, with Butterscotch the miniature horse running a close third. In a sense, the pleasingly absurd Kumiko was the Zellners' true anti-western. Damsel settles for taking some antique costumes out of a trunk and rehearsing for a movie that isn't quite fully polished. The moral is obvious: Have your fun in Minnesota, but think twice before going to Utah. 