North of No South 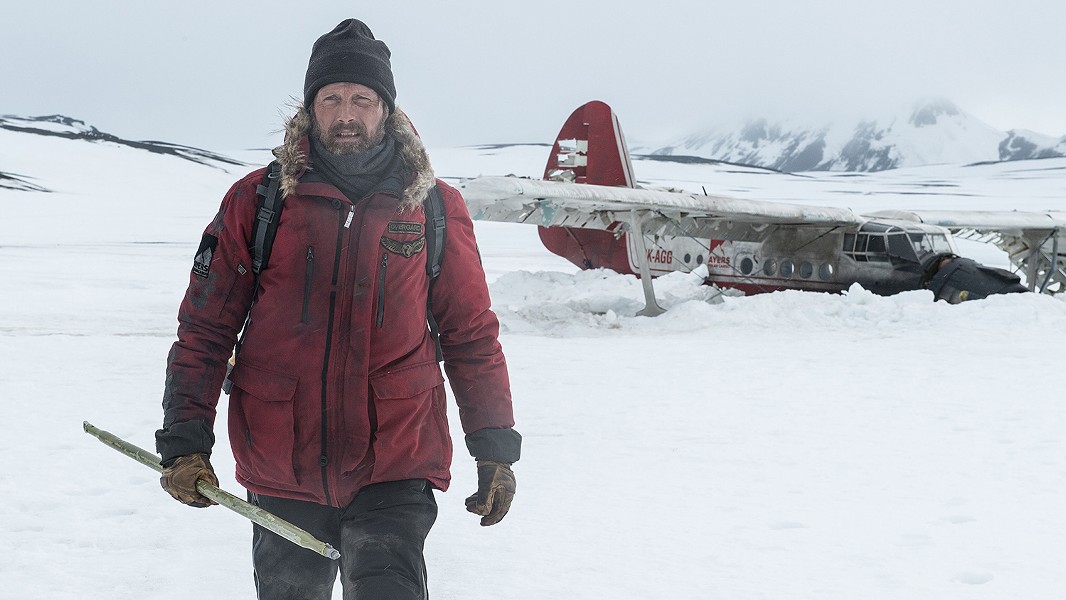 Joe Penna’s Arctic belongs to the “deep-freeze survival adventure” subgenre, in which unlucky protagonists find themselves stranded in the snowy wilderness, trying to stay alive by any means possible. The “deep-freeze” is one of the movies’ hardiest perennial categories for a reason. It’s fun to watch other people being chased by bears and having their frostbitten fingers fall off while we’re relaxing in a warm theater seat munching popcorn.

The main attraction — in fact, practically the only character — in Arctic is the figure of Danish movie star Mads Mikkelsen (Casino Royale, The Hunt). In the role of the character known simply as Overgård, Mikkelsen spends his screen time bundled up to the max, diligently laboring every minute of the short arctic day to rig various means of survival after his prop plane crashes, leaving him alone in an unnamed frozen waste. About Overgård — his past, how he came to be there in the first place — we learn almost nothing, only what is brought out in the extremely spare dialogue. The action opens with his wrecked aircraft already on the ground.

Let’s not go into too much detail about Overgård’s struggles. All frozen adventures, from Nanook of the North to Alive to The Revenant, contain essentially identical ingredients. The setting is never specified, although we know the film was shot on location in the windy tundra of Iceland. Better to concentrate instead on the lead character himself, yet another solitary man of action in Mikkelsen’s lengthy filmography.

If we were to place bets on Overgård’s odds of living through his ordeal, we’d have to believe he has a better than average chance. Actor Mikkelsen has a rugged Nordic face and physique that lend themselves well to costumed historical-action-heroic situations. Whether he’s portraying a Danish resistance fighter shooting down Nazis (Flame & Citron) or a tough-minded horse trader violently protecting his interests in 16th-century France (Age of Uprising: The Legend of Michael Kohlhaas), Mikkelsen projects a certain taciturn stoicism.

He’s generally not the type to get up on a platform and make a rousing speech to his followers. Instead, the typical Mikkelsen character is far more likely to hack an enemy to death with a sword or toss an incendiary device into a room full of spies, without bothering to tell us about his feelings. That is, he often lets his eyes do the communicating, just before and after he springs into action.

Overgård’s adversary in Arctic is nature itself, the wildest, most implacable opponent of all. With this snowy scenery in mind, it would be a pleasure to someday see Mikkelsen in a Jack London adventure, tangling with wolves and unscrupulous gold seekers in the frigid Yukon. For the most part, Overgård’s enemies are silent and relentless. He faces them every day and has to invent radical ways to survive as the circle of fate closes in on him, à la Robert Redford’s solo sailor in All Is Lost, a similar tale of single-minded determination, with a similar lack of dialogue.

Strictly based on superficialities, Penna seems the least likely filmmaker to be guiding a production in the icy outback. The Brazilian native made his name on YouTube, cooking up things like T-Shirt War and the sci-fi short Instant Getaway. The procedural aspects of a survival story — Penna wrote Arctic with frequent collaborator Ryan Morrison — with their strict cause-and-effect, can be liberating for stylists who know how to insert unexpected Easter eggs of characterization or setting into what is essentially a string of interlocking events.

Penna introduces the story’s X-factor — a fellow crash victim, severely wounded (minimally portrayed by Maria Thelma Smáradóttir) — to serve simultaneously as Overgørd’s millstone as well as his inspiration. In the end, there is no distracting either Penna or his main character from trudging on into the whiteness. Arctic, a superior example of its challenging brand, adds to its impact by subtracting every non-essential ingredient. What is left is well worth exploring, for its own sake.