In El Cerrito, a "greatest hits" of regional Chinese noodle dishes is made palatable for the Western diner.

Bert Johnson The Jiangxi rice noodles are the one specialty you won't find anywhere else in the East Bay.

When you walk into Noodles Fresh, a new Chinese restaurant in El Cerrito, the first thing you see is a wall of little blue teapots with water dripping down from one to the next, like a stylized water curtain. Chef and co-owner Wenyan Petersen grew up in the southeastern Chinese province of Jiangxi, in the city of Jingdezhen, which is known as the "porcelain capital" of China — hence the teapots. In a phone interview, Petersen said she wanted to introduce American diners to her hometown cuisine, which is mostly unknown in the United States. (A cursory internet search turned up just two other restaurants that specialize in Jiangxi dishes; one of them, Root Chinese Restaurant, recently opened in South San Francisco.)

But Noodles Fresh isn't the kind of hyper-authentic Chinese eatery that attracts adventure-seekers looking for odd regional specialties or bold, envelope-pushing flavors. Instead, the menu is meant to be a kind of "greatest hits" of famous regional Chinese noodle dishes: dan-dan noodles from Sichuan, "crossing the bridge" noodles from Yunnan, and noodles with black-bean meat sauce like they serve in Beijing. And each of these dishes has been adapted and refined in order to make them more palatable to the Western diner, Petersen explained. In some cases, that means a little more meat is added to a sauce than a Chinese chef would normally use; in others, the level of chili heat is dialed back several notches.

This kind of modified East-meets-West concept isn't so different from the premise behind a restaurant like P.F. Chang's — but Noodles Fresh is less expensive and has better, more distinctive food. It goes to show how deeply regional Chinese cuisine has become embedded in our collective dining consciousness, at least here in the Bay Area, that someone would open a restaurant geared toward Westerners that serves something as obscure, to the average American diner, as half the dishes on the Noodles Fresh menu.

It's an interesting line that the restaurant straddles, then. On the one hand, the service might loosely be described as "Western style," insofar as it's English-friendly and a bit more formal than what you might expect at your typical hole-in-the-wall noodle shop. Plus, the menu is very accessible, with vegetarian and gluten-free options clearly marked. But on the other hand, about half of the customers during my visits appeared to be native Chinese speakers, and the servers — all Chinese — shifted back and forth between English and Mandarin as needed.

The food itself toes a similar line. It's not exactly Americanized, at least not in the overly-sweet, gloopy-sauced manner of Panda Express. But by design, none of the recipes are strictly traditional either, and, in fact, discerning noodle slurpers can find better versions of several of the restaurant's regional specialties elsewhere in the East Bay — if they know where to look. And maybe that's the point: There aren't many places that boast such a wide variety of Chinese noodle dishes under one roof and especially not in a setting that's as unintimidating as Noodles Fresh. For the modestly adventurous Chinese food eater, the restaurant offers a nice entry point into a whole world of dishes beyond your neighborhood takeout joint. For the rest of us, the kitchen serves up some pretty tasty bowls of noodles — by any standard.

The one specialty at Noodles Fresh that you won't find anywhere else in the East Bay are its Jiangxi rice noodles, which the restaurant imports. The main distinction, Petersen explained, is that these noodles are made with natural spring water to yield a cleaner, less-chemical taste compared to ones that are made with plain tap water (if you can taste the difference, you have a finer palate than mine). At any rate, these noodles are good: spaghetti-shaped, with a pleasant bounce to their texture.

Noodles Fresh uses the Jiangxi rice noodles for about half of the noodle dishes on the menu, but two of them are marked as Jiangxi-style dishes — a stir-fried beef and noodle dish, and a noodle salad that's topped with "barbecue"-style chicken. Outwardly, the stir-fry resembled a generic beef chow mein, but was notable for the chew of those soy-sauce-soaked rice noodles, the tenderness of the sliced flank steak, and the hit of fresh ginger that made all the other flavors pop. The noodle salad was served hot and topped with nicely seared slices of chicken breast and finely diced bell peppers. (It was a "salad" in the loosest possible sense.)

The best part of both dishes was that they were tossed in a housemade Jiangxi-style chili sauce made with fermented black beans and various aromatics. Just don't request the dish "mild" or even "medium," or you won't get any heat at all.

The other item that jumps off the menu was the "Guilin beef stew" — a version of Guilin rice noodles, a dish that's famous throughout China but only served at a small handful of places in this country. One of those places — Guilin Classic Rice Noodles, in Oakland Chinatown — is so good that it was hard for me not to feel slightly underwhelmed by Petersen's rendition. It hit a lot of the right notes: the fermented tang of the pickled long beans, the crunch of the roasted peanuts, and, best of all, a heady dose of minced raw garlic. The main flaw was that a heavy dose of Chinese-herb-infused soy sauce made the dish way too salty. And the traditional accompaniment — a bowl of very mild beef broth that the diner uses as a palate-clearing counterpoint — wasn't provided. 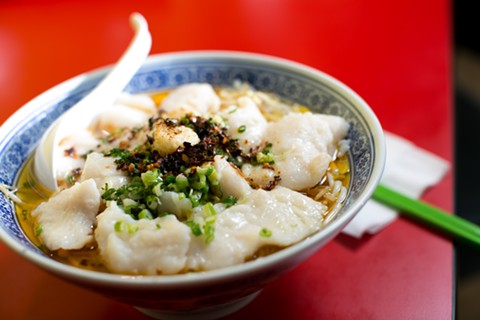 Meanwhile, customers of China Village (Albany) and King Tsin (Berkeley), the East Bay's two titans of Sichuan cuisine, will immediately recognize the dish listed on the menu as "Sichuan Chili Fish." The base of it is a broth infused with the fragrance of a large number of dried red chili peppers. At Noodles Fresh, it has been adapted to be more of a noodle dish (with more of those rice noodles) than a soup, and while the broth was perhaps a touch less complex than the ones at the two Sichuan restaurants, the tenderness of the sliced fish and the smoky heat from the drizzle of Sichuan chili oil on top made for a winning combination.

Of course, the Chinese have about as many varieties of noodles as the Italians have pasta shapes. To keep things manageable, Noodles Fresh has limited itself to two kinds for now: the Jiangxi rice noodles (available in two thicknesses), and fresh wheat noodles made by a local company. So while the restaurant features a couple of dishes inspired by northern China, you won't find the thick hand-pulled noodles that are characteristic of those provinces. For me, the one wheat noodle dish I tried — the Taiwanese beef noodle soup — was the biggest disappointment. Petersen told me she uses fermented tofu and tomato paste as the base of her broth, but none of those bold flavors came across in this rather bland soup. Pickled mustard greens, the traditional accompaniment to Taiwan's national dish, was listed on the menu, but absent in the dish itself. And the noodles were cooked so soft, I'd have never guessed that they were fresh. The one saving grace: The beef was incredibly tender.

While the noodles are the unquestioned focal point, the restaurant also serves a handful of rice plates, as well as a selection of well-executed, if mostly generic, appetizers. Of these, the pork potstickers trumped the scallion pancake. And both were overshadowed by the garlic cucumber — a non-spicy version of a Sichuan specialty in which pieces of cucumber are smacked with a cleaver to loosen up their flesh and help them soak up the flavors of a deliciously garlicky sauce.

It's a comfort dish, really — and one, I'm happy to see, that a restaurant like Noodles Fresh is helping to bring to a much wider audience.