No Pork, No Worries 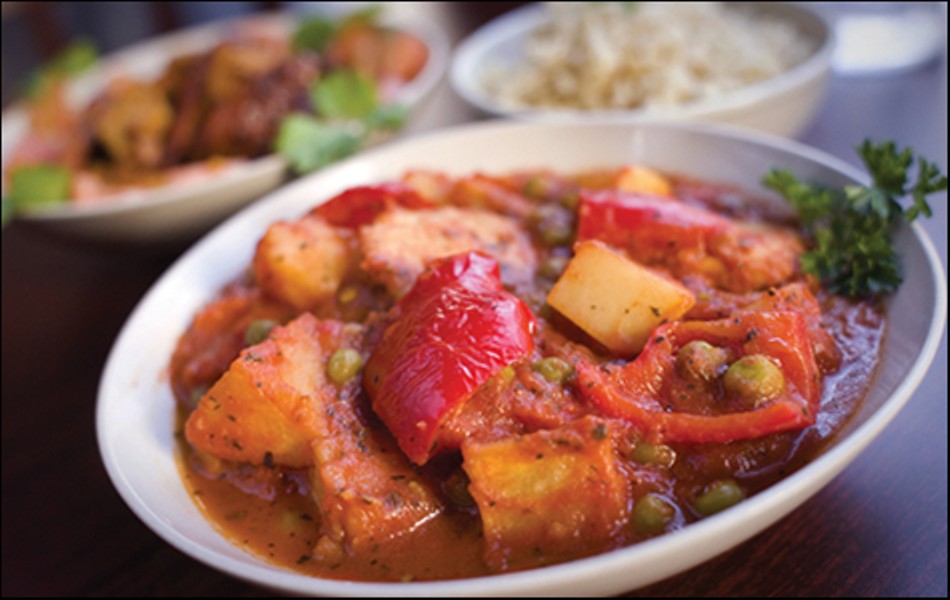 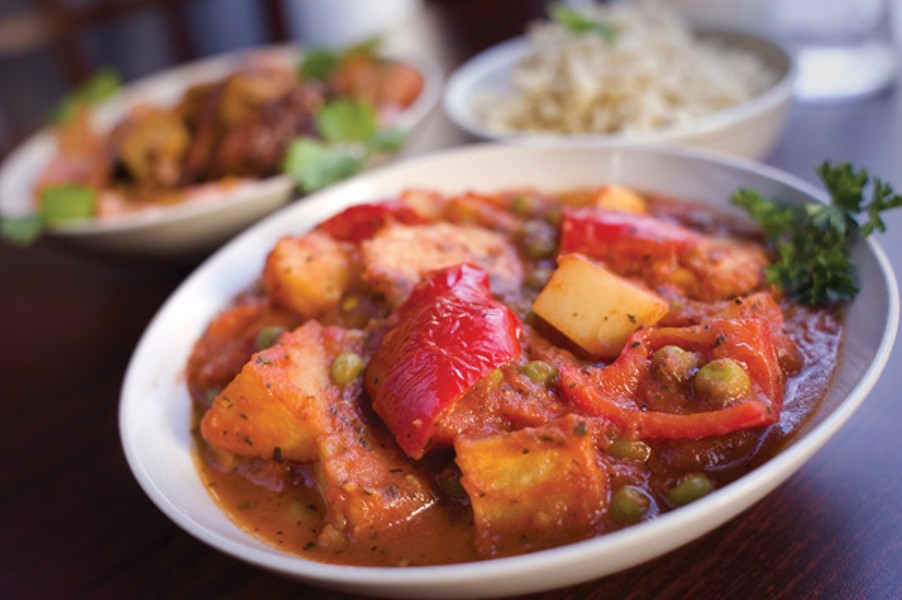 Chris Duffey The afritada, with its huge potato chunks atop faux-chicken hanks, is almost Italian.

Taking the flesh out of Filipino food is like taking the rice out of sushi. But what if you'd never tasted sushi?

One-hundred percent vegan Filipino food, such as that served at No Worries, is highly anomalous, a Star Trek version of a cuisine that in its natural habitat is about 94 percent meat. Thus No Worries' soy-pork menudo and soy-beef bistek might disconcert those who have been fully immersed in the real Pinoy McCoy.

But if you're like most Americans, chances are you've barely even sampled Filipino food, whose obscurity compared to other Asian cuisines is pretty inexplicable, given that US history and Filipino history has been intimately entwined since the Spanish American War in 1898.

But being an adobo virgin means being able to tuck into a No Worries meal without needing to depressurize. No pork, no problem. No cultural reference, no culture shock.

How it is new to you depends on where you've been. For the Jollibee habitué, it's new because no animals were killed to make this soy-fish sinigang. For those who think balut is what shoots from guns (and not the boiled embryo-containing egg and Filipino favorite that it actually is), Pugao's food is new because it tastes a little Asian and a little not. The slow-cooked tomato-sauced afritada, with its tender, doorknob-size potato chunks bridging a red-bell-pepper sweetness and black-pepper heat, perched atop huge faux-chicken hanks: Why, it's almost Italian.

Having moved to Oakland from the Philippines at age seven, Pugao "grew up in a house where my mom cooked every day and it was part of our tradition to eat together as a family." He was sixteen when his mother suffered a heart attack and began cooking lighter food for herself. But because the rest of the household still craved traditional food, "she was cooking two different versions of every meal: one for the family and one for herself," said Pugao, who became a vegetarian so that his mother wouldn't have to eat her lighter fare alone.

"I wanted her to feel supported. Then I went ahead and started expanding and innovating some of those dishes on my own," he said. At nineteen, he gave up animal products altogether. By then, he had already started a vegan-Filipino catering business, having received a startup grant while still in high school.

Open since late October in a high-ceilinged space triangulated between Chinatown and downtown, the restaurant has a briefer menu than most. Yet what it lacks in quantity it overcomes in several kinds of quality: It's high in fiber, relatively low in fat. Even such a classically heavy dish as kare-kare — normally made with oxtails, anchovies, and lots of peanut butter — comes from Pugao's kitchen thick and rich yet somehow also bright and light. It's local; Pugao buys all of his produce and fake meat in Oakland, the latter from world-class flesh-prefabricator Layonna.

Served in brimming, heavy-bodied bowls, the consistently generous portions increase your chances of taking home leftovers and having two-meals-in-one of, say, the perfect golden broth and creamy-soft, subtly fruity chayote in Pugao's tinola, or his tamarind-sour, daikon-spunky sinigang.

"It's fun to search in my memories for how a dish tasted originally and attempt to re-create it" without what many would call its fundamentals, Pugao said. "People think Filipino food is very meat-laden, but its real foundation is its sauces. That's where the slow cooking comes into play."

He proves this with a vinegar-steeped adobo, its nearly-night-sky blackness lit by potent garlic "stars."

Perhaps a symptom of new-restaurant growing pains is a slight inconsistency in intensity. On one visit, some dishes were markedly saltier than others; our pancit — the Philippines' answer to chow mein — was curiously sour and plain and almost colorless, a sort of ghost-pancit. On another visit, the seasonings were balanced and worthy of adoration.

The sarciado's engagingly authentic-tasting fake fish — complete with cute nori "skin" — swam in onions and tomatoes stewed soft and salsa-sweet. An iced glass of melón — fresh cantaloupe scraped with a special tool to make a thick, sweet, pulpy drink, commonly sold by street vendors in the Philippines — balanced the crunch of slender, deep-fried lumpia and the sturdiness of giniling, a faintly sweet stir-fry of fresh peas, carrots, and ground "beef," emphasis on the "beef."

The extraordinarily high fake-meat-to-produce ratio in most dishes here is the real best thing about No Worries, at least for a certain subsector of the flesh-free community that remains mostly closeted, in shame: we who do not love vegetables.

Paguan's food is so homey, healthy, and filling — in a very good way — that the restaurant's ambience feels wrong: too cavernous, too cold. Obligatory exposed ceiling pipes, some walls sandalwood brown, some green-tea green, no trace of softness to absorb a single decibel. We get it: hip. But the effect is rather like eating, in a hangar, meals made by a grandma who loves you with all her heart.