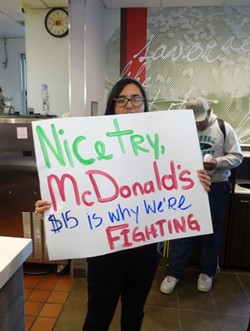 McDonald’s announced yesterday a pay increase for employees of its corporate-owned restaurants. According to a company press release, “[b]y the end of 2016, McDonald's projects that the average hourly wage rate for McDonald's employees at company-owned restaurants will be in excess of $10.”

In Oakland, where the fast-food worker movement has been gaining momentum over the past year, workers simultaneously celebrated the wage hike as a victory, and criticized McDonald’s for what they said is still not a large enough pay increase to reach a living wage. Workers and activists say they are fighting instead for $15. The fast-food worker worker campaign is also seeking union representation across the entire fast-food industry to address issues like safety and job security that go beyond the pay check.


This morning a group of about two dozen fast-food workers and supporters, including organizers with the union SEIU 1021, and representatives from the Allen Temple Baptist Church, the West Side Missionary Baptist Church, and Oakland Community Organizations, marched to the McDonald’s at 14th and Jackson streets in downtown Oakland calling the company’s announcement an April Fool’s joke, and a cheap stunt.

The move by McDonald’s to increase pay for its largely minimum wage labor force follows a similar announcement by Walmart in February to increase its entry wage to $9 an hour. 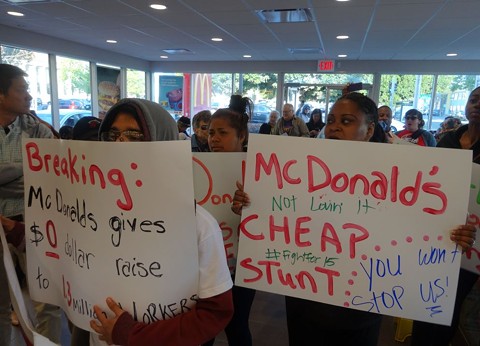