Quick public service announcement: Avoid driving this New Year's Eve in the East Bay and San Francisco by taking advantage of extended hours on both BART and the free Broadway Shuttle in Oakland.

BART just released details of its service plans for December 31, which include operating a normal weekday evening service schedule until 3 a.m. Trains will run every 20 minutes after midnight with extra ones in downtown San Francisco after the fireworks show. 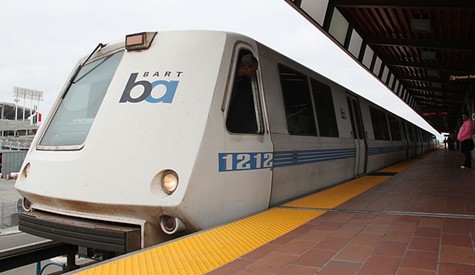 To further ease platform crowding at our busiest stations, Embarcadero, Montgomery, and West Oakland, beginning at 8 pm, BART will utilize a “skip-stop” train pattern into and out of San Francisco with one important change from past years:

• Trains from the Dublin/Pleasanton and Fremont lines will not stop at Montgomery Street Station but will stop at Embarcadero Station.

• Trains from Millbrae and Daly City will make all stops in San Francisco.

After the fireworks end:

• Passengers bound for Pittsburg/Bay Point and Richmond must use Montgomery Street Station. Trains on these lines will not stop at Embarcadero Station on their way out of San Francisco.

• Millbrae and Daly City-bound trains will skip Embarcadero then make all stops. BART will direct passengers on those lines to use Montgomery Street Station which will be less crowded.

BART says it will be deploying extra staff who will be on site to guide you through these complicated instructions. There will be about one hundred employees in yellow vests standing by at station entrances and platforms to tell you what to do, as well as extra station agents on hand at downtown stations. You can check real-time departures on your phone to see when the next train is leaving or text "BART go" to 878787.

BART is also encouraging riders to leave pets and bikes at home, which is probably a good idea!

If you miss the last train, you'll have to wait until 8 a.m. on New Year's Day, when BART resumes operations with a standard Sunday/holiday timetable.

Meanwhile, the City of Oakland and AC Transit are co-sponsoring extended New Year's Eve Broadway Shuttle service, with the free B shuttles operating between Jack London Square and Grand Avenue/27th Street through 1 a.m.

Here's the BART info in handy chart form, which is a bit easier to decipher: