The year is over. Woot.

Oakland's Labrys School, a nonprofit that promotes self-healing and empowerment to women and girls of all ages, races, income levels, and lifestyles, is hosting a New Year's gala to raise funds for their new GRRRLS program. The program will offer innovation and inspiration to girls in middle school, high school, and college as they deal with the dreams and dilemmas of their lives. The night's festivities will include nourishing food and drinks, dancing, multicultural music and singing, and merrymaking festivities and rituals in an attempt to offer a moment of introspection before the calendar flips. The event is ADA accessible, and also alcohol-, drug-, and fragrance-free. Ages 16 and up. — Rick Paulas

If staying up past midnight doesn't sound particularly appealing, the Lawrence Hall of Science has you covered. The famed science museum is holding its annual balloon drop during the underutilized daytime hours of New Year's Eve. This year, to accommodate the crowds, the countdowns will occur thrice, once at 11 a.m., again at 1 p.m., and one final time at 3 p.m. The fun of the drop is free with the price of admission ($12 for adults, $10 for kids), so we suggest spending the time between the drops exploring the distant universe and the hidden wonders of our very own home planet. — R.P.

North Oakland's Copper Spoon feels like a prime destination for a low-key but still celebratory New Year's Eve. The 2-month-old American restaurant, which replaced Art's Crab Shack on Broadway, sports an effortlessly hip aesthetic and an epic cocktail program led by co-owner Vita Simone Strauss, who once worked at Bar Dogwood, Prizefighter, and other prominent East Bay bars. For New Year's Eve, the restaurant is serving a $79 four-course meal, which includes a glass of hibiscus sparkling wine but excludes tax and gratuity. Among the dinner options are short ribs with root vegetables and bourbon sauce; citrusy swordfish with fermented kohlrabi; and a trio of squash for vegetarians. In addition to live music, a DJ, and midnight toast, Copper Spoon promises surprise party favors for diners. — Janelle Bitker 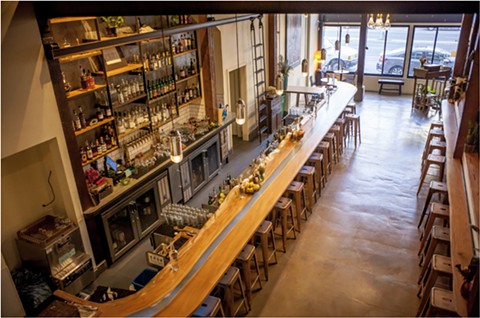 Not everyone wants to rage — or even stay up until midnight — on New Year's Eve. For the person who wants to celebrate while still getting to sleep at a decent hour, a special dinner out is usually the way to go. This year, Uptown, Oakland's Calavera is preparing a four-course feast with two possible seating times. Reserve for 5 p.m. and pay $55 or 8 p.m. for $75, the latter giving you just enough time to head to your chosen midnight destination — bed or otherwise. The menu includes three or four choices per course, including wild mushroom tamal with huitlacoche mole; chocolate-braised goat with nixtamal tortillas; and Veracruz-style red snapper. Most intriguing, though, are the desserts: chocolate-mole pot de crème, cotija cheesecake, and sweetened root vegetables. — J.B.

Don't let the green grass fool you, local ensemble California Honeydrops sings. Actually, it's a Wilson Pickett song, but it's one of the band's favorites and perfectly encapsulates its ethos — a dance party sound clashing head-first with life's harsh realities. The group has become popular all across the country with its infectious music combining classic R&B, funk, New Orleans jazz, snappy rockabilly, and Delta blues. The members have years of experience riling up a crowd. They started out by busking on the streets of San Francisco and eventually worked their way into the club circuit and pretty much took over. Their bio says they don't play music, "they throw parties." Really, isn't that the whole reason to put on some pants and head out to ring in the New Year? Even introverts are guaranteed to let loose. It's worth a shot, anyway. — Aaron Carnes

Northern California's largest gay nightclub will open its multiple levels of dance floors, bars, and lounges for its annual New Year's Eve bash. This year's fun will be hosted by the always boisterous Violeta, while DJs will be spinning the best in Latin, hip-hop, house, and Top 40. You can also enjoy go-go dancers, a free buffet, and the obligatory balloon drop, and there's a 99.9999 percent chance you'll get to shake it to "Despacito." — R.P.

Anyone that joined the marching band in high school is a nerd. Of course, American Pie let the world in on a little secret — band geeks are crazy and a bit dangerous. Unfortunately, most marching bands don't reflect this in their performance. Well, there is Oakland's own, Extra Action Marching Band, which brings scantily clad, pom-pom-carrying cheerleaders and marching band covers of Black Sabbath tunes. Though, most of the band's music sounds in the realm of what you'd expect a football halftime band to play, but there's a real aggressive, punk-rock energy to how they play it. (Years of crashing parties and accosting quiet bars will do that.) Even if you pay money this New Year's to go see them knowing what you'll get, don't expect them to stay on stage and respect the normal boundary lines that your average band would. This will be a crazy night. You'll barely remember 2017 after they're done. — A.C.