Research documents both the joys and stigmas that pregnant men face. 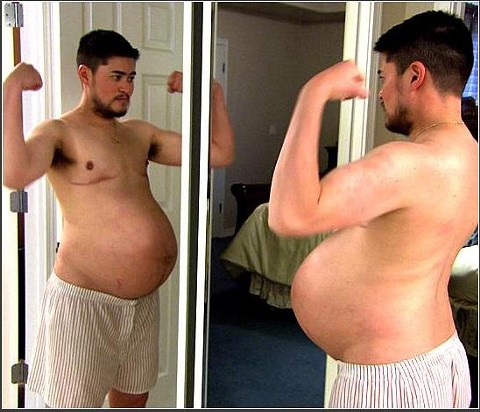 Pregnancy has historically been an experience we tend to view as strictly female, much like our unbridled joy of yogurt and crying during sex. But as more and more transgender people have decided to put buns in their ovens in recent years, it's probably time we reexamine our outdated, gendered assumptions.

New research aims to do just that. In a recently released study on transgender men — the first of its kind, the authors think — 41 participants documented how it feels to be male and pregnant, and also noted both the joys and the stigmatizations they faced.

The study, which was published recently in Obstetrics & Gynecology, was conducted by researchers from the University of California, San Francisco, and examined transgender men who conceived after they’d transitioned. The scientists looked at health measures specific to trans men, such as the effects of testosterone treatments on pregnancy (which were nil, though further research is needed) — but they also highlighted the struggles and discrimination they experienced.

“We know that transgender individuals face a lot of issues with health care access. A lot of providers aren’t trained to take care of them,” researcher Dr. Juno Obedin-Maliver told Yahoo Health. “If you think about maternity clothes or clothes for chest feeding — which is what the trans community tends to call breastfeeding — and the pamphlets that women receive during their pregnancy, they’re all geared toward women, not men. There’s very little for transgender men who are pregnant, where they can get that support and recognition.”

Study participants also said their pregnancies were treated with suspicion, insensitive comments, and hostility from health care providers. "Child Protective Services was alerted to the fact that a 'tranny' had a baby," one participant reported. In addition to insensitive comments, some reported that they were outright denied prenatal care or turned away from certain health facilities.

On a positive note, while some participants expressed feelings of gender dysphoria, others said that pregnancy allowed them to feel more connected to their bodies. "Pregnancy and childbirth were very male experiences for me," said a 29-year-old respondent. "When I birthed my children, I was born into fatherhood."

“Many health care providers may feel confused about how to best care for transgender men — for many, this is new information,” said study author Dr. Jennifer Kerns. “What this study emphasizes is that we can all start with the simple step of asking our patients about who they are and how they view this pregnancy. That’s just good care, regardless of who the patient is.”

Here's hoping that studies like these will help defuse the sort of sensationalized media attention that pregnant men typically garner, and that further steps will be taken to ensure trans men get the support and health care they need.