Arwen Curry's study of the Berkeley sci-fi legend has been 10 years in the making. 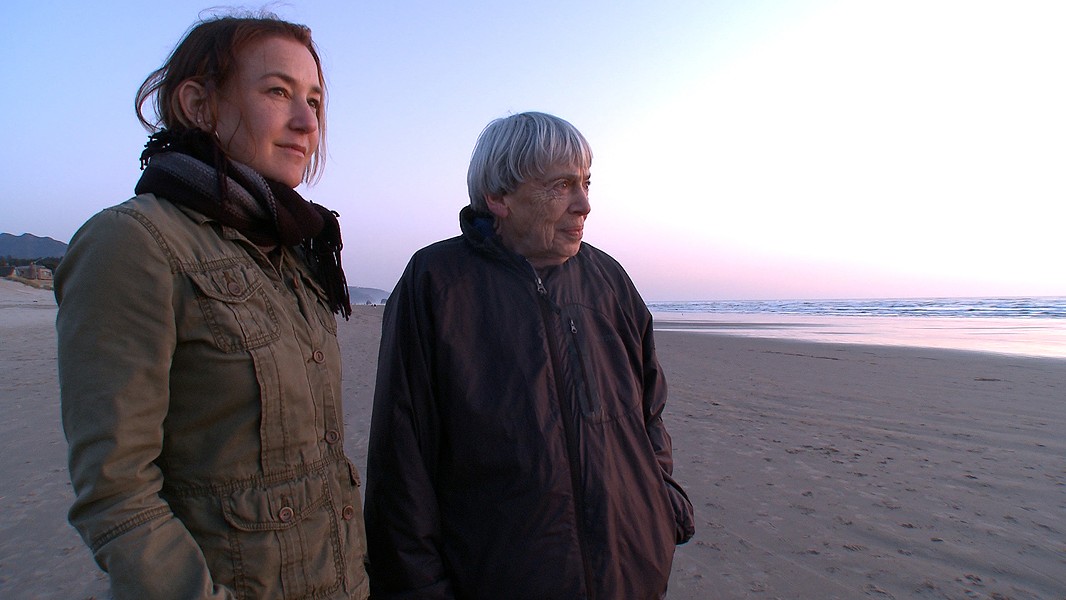 It's entirely appropriate that filmmaker Arwen Curry's documentary, The Worlds of Ursula K. Le Guin, is screening at San Francisco's upcoming 2018 Litquake Festival. If anyone ever was a mover and a shaker, it was Le Guin. Her work moved, and continues to move, countless readers, and her activism shook up the literary world.

Le Guin's young adult "Earthsea" series, her novels The Left Hand of Darkness, The Dispossessed, and The Lathe of Heaven, among many other works, are now considered classics of sci-fi/fantasy literature. As a woman beginning to write in the genre in the 1950s, she faced sexism and rejection because her work did not reflect the hyper-masculinity then favored in literature. Nevertheless, she persisted — and at one point in the documentary is seen saying defiantly, "Ernest Hemingway was unjust and full of shit!" Her real breakthrough came when A Wizard of Earthsea (1968) won a large readership and numerous awards.

Curry, a Richmond native, first conceived the idea for the Le Guin documentary in 2003. While working for the punk magazine Maximum Rocknroll, she had a conversation with her best friend about female writers they admired and Le Guin headed the list. At the time, however, Curry had no filmmaking experience. But after getting her degree at the UC Berkeley Graduate School of Journalism — and while associate producing the documentary, Regarding Susan Sontag — she began reaching out to Le Guin. The Berkeley-born writer, then nearing 80, had been living in Portland, OR, for decades. At first, she agreed to participate, then began having doubts. But as Curry explained, once the two women actually met, "We connected, and she decided to move forward." This represented "a huge amount of trust in a new filmmaker trying a capture a complex, multifaceted life."

That connection was vital, as the film took 10 years to complete. Le Guin, who died in January, never saw the final version.

Their bond was forged partly because of the numerous parallels in their lives. They are both East Bay natives, both immersed in the worlds of imagination. As they continued to work together on the film, they realized they shared the identity of working creative artists who were also mothers. Le Guin raised three children during some of the most productive years of her career, and Curry was raising two small children while making the documentary.

Curry is quick to point out that unlike women sci-fi writers, female documentary filmmakers are not so rare. Still: "Women like Ursula blazed a path for women like me," she said.

Her decade-long relationship with Le Guin remains close to her heart. "Talking to Ursula was always a delight," she recalled. "I enjoyed her humor, her warmth, her view of the biggest picture imaginable. It was an unending conversation, and she still seems to be with me, reminding me of the wisdom and thoughtfulness with which she lived her life."

The Worlds of Ursula K. Le Guin explores the writer's life from her birth in 1929, explaining the influence of both her father, Alfred L. Kroeber, and mother, Theodora Kroeber, whose family name Le Guin retained as her middle initial all her life. Alfred Kroeber, an anthropologist at UC Berkeley, "spent his life talking to destroyed peoples," according to Le Guin, and became renowned for his study of "Ishi," believed to be the last living Yahi Native Californian. Theodora Kroeber documented Ishi's life in the classic book Ishi in Two Worlds. In the film, Le Guin's eyes mist as she contemplates the genocide her parents studied. This would influence her lifelong dedication to alternatives to violence and exploitation.

Curry also focuses on Le Guin's evolving feminism. The second "Earthsea" book, The Tombs of Atuan, describes a women-only society, isolated on an island. But later in her career, Le Guin began to question her portrayal of the main female character's destiny being controlled by men. She also believed that criticism of the groundbreaking novel The Left Hand of Darkness, whose characters are able to change gender but are always referred to as "he," was justified.

Yet another seminal Le Guin work featured in the documentary is the short story The Ones Who Walk Away from Omelas, in which a city's happy inhabitants flourish only because one child has been secreted away to suffer. Curry takes viewers to Le Guin's alma mater, Berkeley High School, into a classroom of students reading and discussing the story. The honesty of the students as they explain what their own choices would be is compelling — and shows the continuing power of Le Guin's writing.

Many well-known writers appear in the documentary, commenting on Le Guin's work and its influence on their own, including Neil Gaiman, David Mitchell, Margaret Atwood, and Michael Chabon, who will interview Curry as part of the Litquake event.

In 2014, Le Guin was awarded the National Book Foundation Medal for Distinguished Contribution to American Letters, considered a major literary honor. But in classic Le Guin style, she used the moment to lambast the state of the publishing business and call attention to the culture-changing power of art, according to Curry.

The film shows Le Guin speaking to rapt audience members. "Books aren't just commodities; the profit motive is often in conflict with the aims of art," she says, in effect directly challenging one of that event's sponsors, Amazon. Curry particularly loves what she said next: "We live in capitalism; its power seems inescapable. But then, so did the divine right of kings. Any human power can be resisted and changed by human beings. Resistance and change often begin in art."

Le Guin's legacy is a broad one. "She was influential in opening up American literature to the fantastic, and she elevated [young adult] literature so it couldn't be dismissed," said Curry. "In this moment, when we despair about the future of the world, she reminds us that we cannot give up imagining how it could be different." 