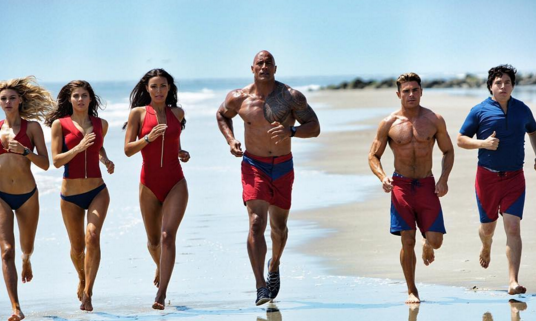 Speaking of precipitous plummets: Hey, what happened there, Seth Gordon? After kicking off his filmmaking career with the ridiculously entertaining 2007 documentary The King of Kong: A Fistful of Quarters, as well as directing several episodes from the “peak” eras of Community, Parks and Recreation and The Office, there were reasonable expectations of comedic competence from Gordon. Instead, his first four features form a guffaw-free study in sour cynicism: Four Christmases, Horrible Bosses, Identity Thief, and just when you think the common denominator can’t sink any lower, here comes Baywatch.

Technically, Baywatch is a comedy spin on the 1990s syndicated staple starring David Hasselhoff and Pamela Anderson as lifeguards with a liberal idea of jurisdiction, but the only influence that really matters here is the Jump Street franchise. The mission statement is the same — turn an outdated cheeseball TV drama into a soft-R, nostalgia-tickling bro-buddy action comedy — and so is the formula. Zac Efron and Dwayne Johnson were hired as mismatched stars, key cameos were secured, a plot about a mysterious designer drug was devised, nudge-nudge self-references were sprinkled throughout.

Add in the requisite roster of bathing suit-stuffing beauties, led by Alexandra Daddario, and you have an airtight package that seems to write itself. Instead, the screenplay is credited to Damian Shannon and Mark Swift, a team whose only other produced scripts are Freddy vs. Jason and the 2009 remake of Friday the 13th. Both of those films are funnier and less disturbing than Baywatch. There are low-budget, softcore, straight-to-late-night-cable, bikini carwash company movies with sharper comedic chops than this major motion picture. Even the always reliable Hannibal Burress fails to get a laugh.

This is a movie in the very loosest sense of the word — more accurately, it’s a joyless succession of pop culture buzzwords and lazy putdowns. Almost every scene feels like it was created for the trailer; almost every shot is framed to appease corporate sponsors. The only exception is a seemingly endless sequence toward the beginning of the film that involves a plucky slob who gets his genitals stuck in a beach chair — according to recent Pentagon leaks, that scene was created to torture prisoners of war.