“Our story has never been present. It’s often sidestepped because it’s inconvenient. But it’s the truth, and students should learn it.”

by Carolyn Jones of EdSource 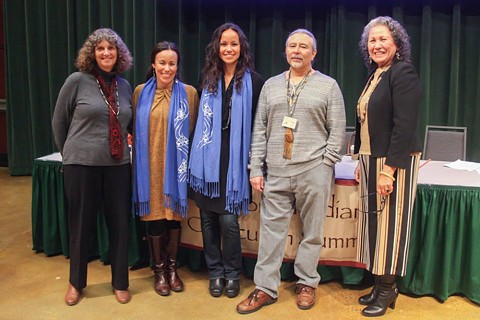 For decades, California 4th-graders have studied the Golden State: its geography, people and history. Now, historians and Native American teachers are pushing to broaden that curriculum to include more on the culture and history of the state’s original inhabitants.

“For so many years, the story of California Indians has never really been part of classrooms,” said Rose Borunda, an education professor at Sacramento State University and a coordinator of the California Indian History Curriculum Coalition. “Our story has never been present. It’s often sidestepped because it’s inconvenient. But it’s the truth, and students should learn it.”

Borunda, who is Native American, and her colleagues are working to educate teachers statewide on the history of California’s indigenous people, who were among the most populous and diverse Native Americans in North America. Their curriculum would complement the state’s History-Social Science framework, which was updated two years ago.

The changes are part of a broader effort to expand Native California curriculum in the state’s K-12 schools. In October, Gov. Jerry Brown signed AB 738, which requires the state’s Instructional Quality Commission — which advises the State Board of Education on curriculum — to create a Native American studies class curriculum for high schools that will satisfy the elective course requirements for admission to the University of California and California State University. Earlier this year, Brown signed AB 2016, which creates an elective high school ethnic studies course that could also include Native American history and culture. The State Board of Education is required to adopt the ethnic studies curriculum by March 2020.

The story of Native Californians begins at least 10,000 years ago when people first began settling along the West Coast. Before the arrival of Spanish colonists in the 1700s, Native Californians numbered more than 300,000 and lived more than 200 tribes, dwelling in almost every part of the state. Because tribes in California were geographically isolated from the rest of the continent, many tribes had no contact with Native Americans outside California, and some tribes — especially those in remote areas — were among the last in North America to encounter Europeans.

All California public school students, for at least 50 years, have spent time during 4th grade learning the state’s history, with a focus on the Spanish missions — the 21 outposts established by Father Junipero Serra, soldiers and settlers in the late 1700s and early 1800s. Students created missions out of sugar cubes and popsicle sticks, visited missions and sometimes learned a version of the mission story that emphasized the Spanish perspective, rather than that of native people.

While the missions marked the beginning of colonization in California, they were also the beginning of the end for most tribes, as thousands were enslaved by missionaries, killed by settlers over the next few decades or died of diseases introduced by Europeans. Within 70 years of the Spanish arrival, the native population dropped to fewer than 70,000, according to the state’s Native American Heritage Commission.

In 2016, when the state updated its History-Social Studies framework, the mission chapter was broadened to include more information about Native Californians, how they lived before colonization and how they were affected by the arrival of settlers. Now, missions are taught as “sites of conflict, conquest and forced labor,” according to the standards. “It is clear that even though missionaries brought agriculture, the Spanish language and culture, and Christianity to the native population, American Indians suffered in many California missions.”

The standards now emphasize broader themes in the mission era, such as immigration and how cultures change when they come together and colonization’s impact on the environment, such as the introduction of farming, livestock and invasive species.

“We changed it because it was the right thing to do,” said Nancy McTygue, executive director of the California History-Social Science Project at UC Davis, which oversaw the framework revisions.

“It’s better history teaching. It’s more responsible. Whatever the topic, we wanted students to have a more nuanced understanding of the past, so they can make more informed interpretations.”

Those efforts have progressed in fits and starts, he said. Some tribes have worked closely with local elementary schools for years, providing lesson plans and guest speakers to supplement the 4th-grade California history curriculum. Other schools have done less, and in fact some still teach popsicle-stick mission projects despite the framework overhaul, McTygue said.

Separately, Assemblyman Phil Ting successfully advocated for a $5 million grant in the 2017-18 state budget for the California Historical Society and McTygue’s group to create free online materials, such as original documents and photos, for K-12 teachers to implement the new history-social science framework, including the history and culture of Native Californians.

“This $5 million investment by the state will provide students and their teachers with the resources to learn about — and from — the people, places and events that have shaped California for thousands of years,” Ting said.

Around the same time the history-social studies framework was being updated, Borunda began to get involved. She became interested when the subject of Native American curriculum in general came up at a meeting of the California Indian Conference, an annual meeting of Native Californians to network and discuss issues affecting their communities.

“A man was at one of these meetings who’s a teacher. He started crying because he was told he had to teach the California mission project,” Borunda said. “It stuck with me. I thought, well, here I am, an education professor. Maybe I can change this.”

Working with her colleagues at Sacramento State, as well as tribal members, teachers and historians, Borunda began compiling free online lesson plans for elementary teachers to supplement what’s already in the framework. The coalition has also hosted several statewide teacher forums to share curriculum and strategies for teaching Native Californian history and culture.

The topic is complicated, Castro said. California tribes are as diverse as the state’s geography, so no single lesson plan fits all tribes, she said. California tribes spoke hundreds of languages and dialects and each had a culture adapted to the areas in which they lived: the desert, the mountains, the Central Valley or the coast.

But perhaps the more challenging aspect of the curriculum is teaching about the enslavement, disease and slaughter that befell native people after the Spanish arrival, McTygue and Castro said.

“It’s a difficult period in American history, and it’s especially hard to teach to 9-year-olds,” McTygue said, referring to the age of students when they study California history in 4th grade. The difficulties are in part due to a lack of materials about the pre-Spanish era, she said, and in part because of the sensitive nature of the subject matter.

Even the terminology poses challenges. For example, using the word “genocide” can be problematic, because thousands of Native Americans still live in California and have thriving cultures. “Genocide” implies that the native culture was completely erased, Castro said. In fact, California has more Native Americans — 362,801 — than any other state, according to the most recent Census data.

Focusing on the mission period can also detract from 10,000 years of Native Californian history and culture, he said. After all, there’s a lot more to native people than the colonization story, he said.

“A lot of it comes down to terminology,” he said. “Instead of using the word ‘genocide,’ you can say, ‘We were forced to work at the missions. We didn’t want to be there and we suffered for it.’ ”

Castro suggests that elementary teachers look at broad topic areas, such as salmon or fire, and incorporate multiple academic subjects into their lessons. For example, a unit on salmon would include native traditions and lore about salmon, as well as lessons on the fish biology, river ecosystems and seasons. A unit on fire would cover how native people burned fields to enrich the soil, manage vegetation to attract wildlife and prevent larger wildfires. This unit would include lessons on ecology, land management and how humans alter their environment.

“It can be done quite well, in a non-traumatizing way, without shading the truth,” he said. “Right now there is abysmal ignorance out there because people just weren’t taught about Native Californians in school. But people need to know this. They need to know what happened, that we’re still here, that there’s still things to be saved.”

This story was originally published by EdSource.org.
Prev
Next