Mother!: Who Are All These People?

Darren Aronofsky's Freudian allegory is nowhere near as interesting as Black Swan. 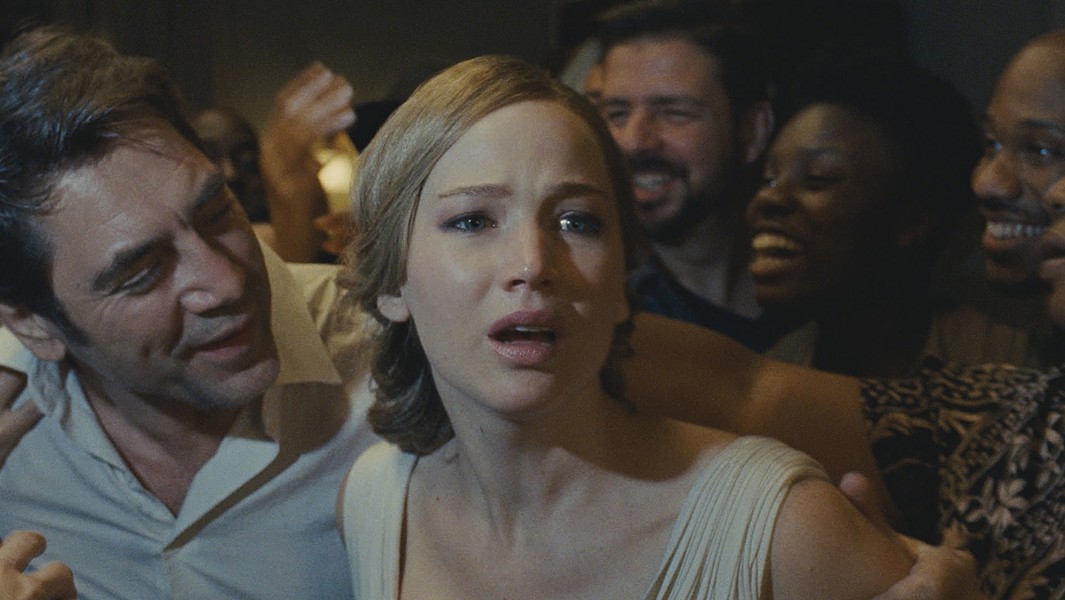 How good is Darren Aronofsky, really? Gazing back through his filmography, that question seems to arise with every new release, as if each succeeding piece needs to prove itself independently, on its own separate merits rather than as a result of the director's reputation. Some filmmakers may benefit from accumulated track record, but Aronofsky's projects generally arrive with their sensationalism heralded and up front, as unique, startling artifacts from unrelated spheres far away. We never know quite what to expect from him. Mother! is no different.

The first sign of trouble is in the names of the characters. Mother (Jennifer Lawrence) and Him (Javier Bardem) inhabit a grandiose but gloomy Victorian-style mansion in the country, essentially a fixer-upper Old Dark House. Mother does all the fixing up, from plastering to plumbing, yet everything seems to revolve around the moody, self-absorbed Him and his best-selling poetry. There's a strong hint that all is not well in the marital intimacy department.

That's not the only thing worrying Mother. A strange sound emanates from the walls, a dull heartbeat that only she can hear, accompanied by a visual of a squamous-looking bit of throbbing gristle. Then there's the blood spot on the floor that won't go away. And her trips to the basement are always a scary adventure. Him's passive-aggressive behavior aggravates Mother, as does his odd devotion to a hunk of carved crystal that he keeps on a pedestal in his office. All the while, over-amped household sound effects clatter ominously. Mother holds it all in. When her jitters become too strong she relies on a remedy, a bit of yellow powder dissolved in water.

Matters come to a head one night after a strange Man (Ed Harris) comes to the house unannounced, followed by his companion, a Woman (Michelle Pfeiffer in wicked mode) with a prying, mocking manner. They immediately adopt an uncomfortably too-familiar attitude, especially toward Mother. To her dismay, Him invites the intruders to stay as long as they want. Soon, too soon, other strangers appear and do likewise.

Squirming helplessly in our theater seats, we realize we're trapped in a Freudian nightmare about unwanted offspring. What could be drearier? It's difficult to entirely fault the actors for their performances but impossible to let them off the hook. As conceived (if that is the word) by writer-director Aronofsky, the character of Mother relies on Lawrence's essential icy opacity to convey would-be maternal panic as the strangers invade her space, but her distress seems to have just as much to do with upset dinner plans and trashed living space as with the heartbreak of thwarted motherhood. As Him and Man, Bardem and Harris never quite register as anything more than stock figures. The same applies to the Gleeson brothers, Brian and Domhnall, as antagonistic siblings.

The tight, claustrophobic close-ups lose their impact as the movie rages on. Only Pfeiffer breaks through the fog — she's the epitome of the horrid guest who refuses to leave. The film eventually boils down to a feverish actors' exercise, but to what purpose? Nothing is quite so awkward as a strained allegory with delusions of grandeur. Since when did anyone care so violently about a poet?

Women under stress are an Aronofsky specialty, but Mother! is nowhere near as interesting as Black Swan. Not even close. By the time the forced grotesquery runs its course we tour a roster of familiar places — somewhere outside Polanski-ville, near Buñuel-opolis, in Von Trier Township on the road to Cronenberg County and the unhappy community of David Lynch-burg (pop. 1).

Aronofsky's reductive fright pageant is the exact opposite of, say, a dully pleasant romantic comedy of upper-middle-class people and their splendid country home. Fine idea to spear the bourgeoisie, but Beatriz at Dinner already went there earlier this year, more convincingly. That is not to say that Aronofsky's energetic horror show is ineffective — after sitting through it, you won't feel much like entertaining at home.