More Than Just a Day at the Beach

The rebellious spirit of Matthew Maguire's first Labor Day is spreading again across our country. Join the parade!

Roxanne Pasibe
Texas populist Jim Hightower is the writer and editor of The Hightower Lowdown.

It's a bit odd that in America's thoroughly corporatized culture, we have no national day of honor for the Captains of Industry, and yet we do have one for working stiffs: Labor Day! Where did it come from? Who gave this day off to laboring people? History books that bother mentioning Labor Day at all usually credit president Grover Cleveland with its creation: He signed a law in July 1894 that proclaimed a holiday for workers in Washington, DC, and the federal territories.

Cleveland? Holy Mother Jones! He was an extreme laissez-faire conservative, a "Bourbon Democrat" who never lifted a presidential pinkie to ameliorate the plight of exploited workers. To the contrary, in that same month of 1894, Cleveland enshrined himself in labor's Hall of Eternal Infamy: At the behest of robber baron George Pullman and other railroad tycoons, he ordered some 12,000 US Army troops to crush the historic Pullman Strike, which was being led by union icon Eugene V. Debs. Thirty workers were killed, Debs was arrested on trumped-up charges of conspiracy, and all workers who supported the strike were fired and blacklisted.

Far from being a gift to workers, Cleveland's recognition of Labor Day was a desperate political ploy to mollify the anger of the union movement he had just decimated. He and his Democratic Party rushed the federal holiday into law only days after his military assault on Pullman strikers.

In fact, this day was not "given" by anyone in power — it was taken by laborers themselves. In a bottom-up act of democratic audacity, this was our first national holiday to be put on the calendar by ordinary people. And they were not doing it just to get a day at the beach, but to get into the faces of power.

Matthew Maguire, a 19th-century New York machinist and an unrelenting activist for higher wages and shorter hours, was the one who first proposed a daylong solidarity rally to focus the forces of labor on reclaiming the democratic rights of workers and gaining a fair share of the wealth they create. Known as "the dauntless Maguire," he was secretary of the fledgling New York Central Labor Union, and in May 1882, he called for all 56 unions in the vicinity to make "a public show of organized strength."

The CLU agreed and set the date of Tuesday, September 5, for a "Mammoth Festival, Parade and Pic-Nic." Adding to the audacity, the union council unilaterally declared that the day was to be a holiday for all workers who wanted to leave their jobs and join the action. Doing so was beyond bold, for it could get them fired — the bosses ruled workplaces with an iron hand, compelling twelve-hour days, six days a week, for $2 a day. 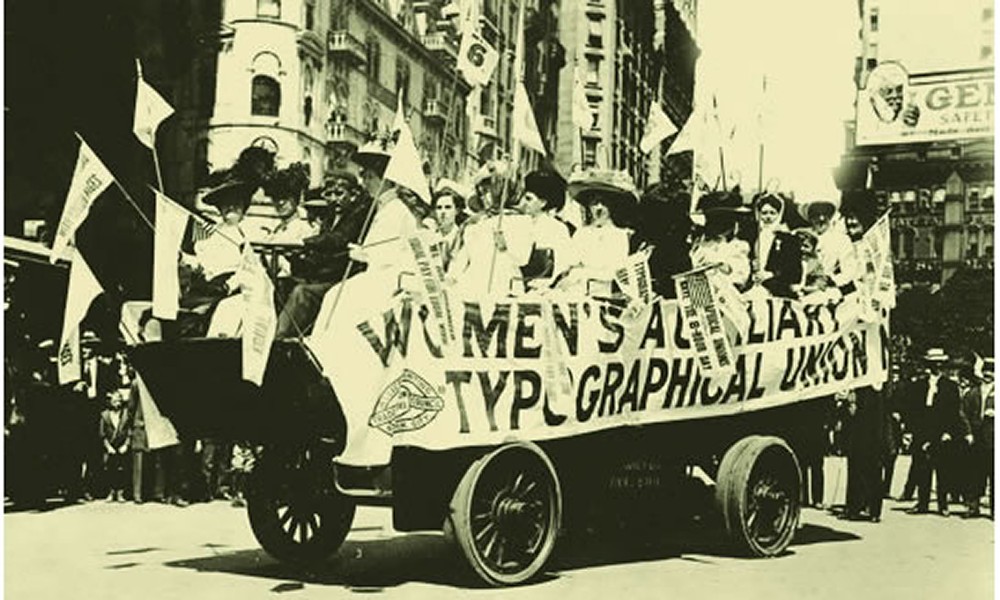 Sure enough, as the 10 a.m. start time approached, only 80 union members had mustered at City Hall. But then came a faint sound of horns and drums — 200 members of the jewelers union from Newark were just minutes away, coming with a 35-piece marching band! This small starter group kicked off the parade, and after a few blocks 400 bricklayers merged with them from a side street, moving in step behind wagons bearing artistic arches of brick as testaments to their skills. At nearly every cross street, more marchers joined: longshoremen in checkered jumpers; frame makers wearing beaver hats, carrying huge axes, and escorting a large wagon proudly displaying furniture the framers produced; cigar makers with red banners, a red-sashed official, and a singing society belting out ballads; and piano makers marching with a float bearing one of their trade's well-crafted instruments and a union member enthusiastically pounding out tunes. Thousands of workers paraded — row after row of laborers, marching six abreast with verve for miles through what was then the most ostentatious corridor of wealth and power in the United States.

In a 1982 article, historian Richard Hunt described the wondrous incongruity of this mass of working-class Americans striding so purposefully up Fifth Avenue: "They passed August Belmont's house; they trudged on past the tonish Burnswick Hotel; past the uptown Delmonico restaurant; past the elegant new Union League Club; past the mansion of Vincent Astor. Mrs. Astor — along with many of her millionaire neighbors — was in Newport for the season. Nonetheless, if the consciousness of capitalism was not penetrated, its precinct was."

The day culminated with a frolicking festival attended by 25,000 at Elm Park, which included the city's biggest beer garden, a dance pavilion, playgrounds for children, and ample picnic areas. (Note to present-day organizers: If you want people to turn out, follow this 1882 model of providing beer, music, food, and fun — so people will want to come.)

It was from this march and festival that both the concept and name of "Labor Day" was born. Afterward, New York's CLU resolved to do it annually.

Of course, barons and bosses damn near swallowed their $10 cigars at such effrontery and tried to forbid it; editorialists decried it as rank ingratitude to the "job creators" of the day; and the establishment's politicians warned that labor's show of strength was anarchy on parade.

But workers had found their voice and a measure of class-consciousness in a day to focus the public on their cause, and unions quickly spread the idea to other cities across the country. By 1894, when Grover Cleveland finally sanctioned the federal holiday, 23 states had already set aside September's first Monday as labor's own day.