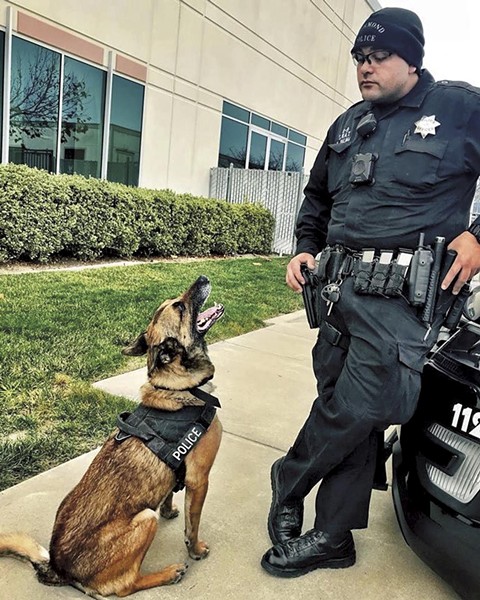 The official account of the shooting provided by Richmond Police Chief Allwyn Brown omitted several key facts, is sharply at odds with witness accounts, and has been contradicted by several sources familiar with the multiple investigations into the incident.

The shooting is the latest controversy to hit a department that, just four years ago, was heralded by the U.S. Department of Justice as a national model for 21st Century Policing. But under Brown, who became chief in 2016, the RPD is becoming known for incompetency, low morale, sexual misconduct, and repeated factual inaccuracies. Increasingly, the department is regressing to its reputation from the 1980s and 1990s, when it was nationally known for misconduct and unfettered use of excessive force — particularly against African Americans.

According to an internal memo Brown wrote to City Manager Carlos Martinez and the Richmond City Council, the shooting occurred around 8 p.m. on Feb. 27. Police received a report of an intoxicated man, later identified as 26-year-old Nahum Perez, at the Fourth Street Market, which is located across from Nevin Park. The park covers two square blocks in the heart of the Iron Triangle, a neighborhood long known for homelessness, violence, and illicit drug activity.

Brown claimed that a city-operated Closed Circuit Television (CCTV) camera showed Perez lingering outside the store and that Perez was seen putting a pistol in his waistband. Brown did not specify whether the pistol was seen by a witness or on a video recording.

When police arrived, according to Brown, Perez fled the area on foot. Two officers pursued Perez, the chief wrote, and during the pursuit, Perez fired a single shot in the direction of the two officers.

"Two uniformed police officers converged immediately and gave chase on-foot, the male suspect ran toward 5th Street," the memo stated. "The suspect fired at the trailing officers along the flight path, but then was intercepted by a second detective who engaged him with gunfire, at/near the 500 block of Nevin Ave."

The chief wrote that Perez, who is expected to live, was unarmed when the detective shot him, although police found an unloaded handgun in another area along his flight path, possibly discarded by Perez. According to Brown, Perez had a loaded magazine in his possession at the time he was shot.

But two sources familiar with the investigations said Brown's account of the shooting was suspicious because of omitted information and numerous questionable facts. For example, the memo claimed Perez was recorded on video camera near the store, which is monitored by the police department, but then traveled out of range of the surveillance cameras. "The last CCTV view of him captured him walking up 4th Street from the store," Brown wrote.

In fact, the Fourth Street Market is more than two blocks from where Perez was shot and the entire area around the crime-ridden park is heavily covered by city surveillance cameras. Perez's two-block flight was within surveilled areas as is the intersection close to where he was shot, a source said, confirming the understanding of neighbors. In addition, all five officers who responded to the scene were equipped with bodycams, which should have recorded the entire incident from the time police first arrived. Two sources close to the investigations said that each of the five officers at the scene have claimed that they shut off their bodycams prior to the detective shooting Perez.

Brown's claim there was only one video record of the incident was perplexing to residents who know that the police monitor numerous cameras in the neighborhood. Three weeks later, Richmond Police Spokesperson Lt. Matthew Stonebraker, amended Brown's dubious claim in an email to the Express, "A combination of CCTV and AVR [bodycam] footage captured portions of the incident," Stonebraker wrote.

What exactly was recorded by the various surveillance devices is unknown because the CCTV and bodycam footage is not being released pending investigations by the police department and the Contra Costa County District Attorney's Office.

The two-block-square park and the surrounding neighborhood where the foot chase and shooting took place also is covered by a recording system called ShotSpotter, which pinpoints the location of gunfire. According to two sources familiar with the investigations, ShotSpotter recorded all five of the detectives' gunshots but did not yield any evidence of the shot allegedly fired by Perez. That contradicts Brown's memo, which claims Perez fired a shot at the two officers who were chasing him.

Several residents who live near the Nevin Community Center said they also clearly heard five shots, but not the alleged first shot, "We heard the whole thing, yelling like someone was in a fight and then five rapid shots, boom, boom, boom, boom, boom," said one resident, who asked not to be identified. "After, we heard police yelling 'what's your name?' in both Spanish and English."

Brown also failed to note that the detective who shot Perez also shot out the front door and windows of the Nevin Community Center, a home to neighborhood meetings, adult-learning programs, computer access for residents, and numerous classes for underprivileged children. The stray bullets shattered the community center's front windows, and at least one round was lodged in a classroom wall. An employee was in the center at the time and was nearly missed by one shot, the employee said, requesting anonymity.

It took the Richmond Police Department almost three weeks to release Perez's name. And they have yet to release the name of the police detective who shot him. However, a source told the East Bay Express that the detective was Ofc. Kristian Palma. It's unclear whether Palma was relieved from duty pending the investigations.

Palma has a checkered record with the department. In 2015, when he was part of the K-9 unit, he was the subject of a federal lawsuit. During a yard-to-yard search, Palma loosed his Belgian Malinois police dog on Humberto Luque, a retired police officer from Mexico who was sleeping in the backyard of a friend's home. The dog bit down on Luque's arm with such force, it took several officers to pry the attack dog from the innocent man's arm. Luque lost partial use of his mauled arm and the Richmond Police Department settled the lawsuit for a sizable sum.

The shooting of Perez is just the latest of a growing list of police blunders, derelictions of duty, and false statements by Chief Brown. Adding to the problem, Richmond's new city manager, Martinez, appointed by the city council last August, has tacitly approved the department's misconduct and helped to encourage the poor behavior by cultivating an air of secrecy around his office and the police department.

The most notable of these failings was Brown's misinformation to the City Council during the investigation into a sex scandal involving as many as 11 Richmond police officers, including two school resources officers, who were having sex with a then 18-year-old female sex worker. The teenager, who went by the name of Celeste Guap, had been the victim of sexual abuse and had been a street sex worker from the age of 12. During an internal investigation, Brown spirited the teenager to a Florida rehabilitation facility where she could not contact her attorneys, family members or the press, and where she was prevented from cooperating with at least three county investigations into the growing police scandal.

Brown told the council that he had consulted with social workers at Richmond's Family Justice Center to arrange Guap's confinement and treatment for drug addiction, but that claim was later revealed to be false.

Brown also hid the fact that his chief of staff at the time, Lt. Felix Tan, was sexually involved with the teenager. Instead of firing Tan, Brown rewarded him with three out-of-state, taxpayer funded trips with a girlfriend, Yevette Medina, who is Brown's secretary.

Then there was the firing of the widely respected Capt. Mark Gagan, who had a reputation for honesty and community-oriented work. Gagan was fired on trumped-up charges related to a leaked police report. Despite a lengthy and expensive internal investigation, those charges were never proven, but Brown fired Gagan anyway. Former City Manager Bill Lindsay hired Gagan back several months later so he could retire with his unblemished reputation still intact.

Then there was the killing of Rashanda Franklin, a young mother who was being terrorized by her ex-boyfriend, Lawyer Deshan McBride. McBride had beaten Franklin with his fists while she dropped her six- and seven-year-old boys at school. McBride continued to make threats against her life during the following weeks. One evening, Franklin called 911 to report that McBride was on her doorstep threatening to kill her. Two Richmond police officers arrived at Franklin's home, detained and handcuffed McBride, but then released him minutes later without conducting a required lethality assessment. Nor did the two officers bother to write a domestic violence report as required by local and state law.

Roughly twelve hours later, McBride shot Franklin in the head as she was dropping her boys off at school.

Despite a growing list of police blunders and misconduct, City Manager Martinez, who has authority over the police department, has taken no action against Chief Brown or his errant officers. Sources inside the department say that Martinez's failure to reign in the bad behavior has emboldened Chief Brown to continue covering officers' misconduct in his statements to city officials and the public. Martinez failed to return calls from the Express seeking comment on this story.

Perez has retained an attorney.