At home DNA-testing kits from AncestryDNA, 23andMe, Family Tree DNA, MyHeritage, and others look at heritage with sometimes interesting results. Careful what you ask for. 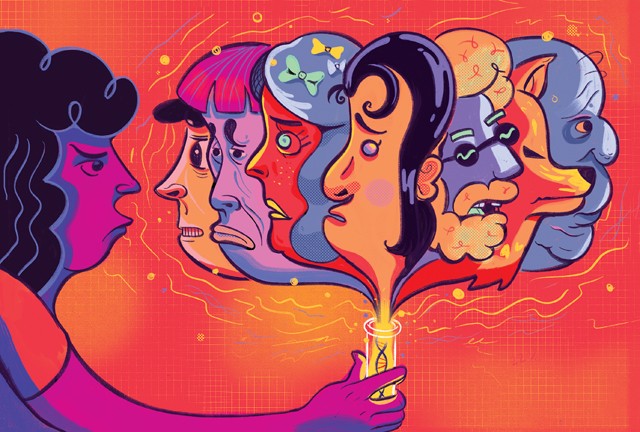 The quest for self-knowledge has long been a grand philosophical mission, but lately it’s gone granular, down to the particles of our very existence: our DNA, revealing the shadow of our ancestors through a single dab of spit.

Home DNA-testing kits have become all the rage, with sales reportedly soaring in 2017. They’ve been given for birthdays, anniversaries, graduations. Big-name companies like AncestryDNA, 23andMe, Family Tree DNA, and MyHeritage pushed out inescapable ad campaigns at the holidays, even offering giftwrap.

And while many people seem delighted with their results, clearing up family mysteries (or adding to them), illuminating ethnic roots, possibly connecting with newly discovered relatives through a “matching” feature offered by some companies, others — including some members of Congress — are skeptical. Not only about the accuracy of results, but about privacy issues, the gathering of health-risk data, and what happens to an individual’s personal information once the testing is complete.

The home kits — which go for about $100 for a basic test to $350 for more complex analyses — are part of a new, lightly regulated industry. So before buying one on a whim, experts caution to read privacy policies thoroughly and be prepared for unexpected revelations. When you turn a microscope on family history, there’s often more than meets the eye.

Andre Wilson of Hercules, a writer who works in Oakland, was quite pleased with his AncestryDNA test, saying it confirmed some family lore. “My grandmother always said that her grandmother resulted from the forced union of an Irish tobacco planter and his mulatto slave,” Wilson said. “The DNA test showed my ancestors mostly came from Nigeria, Benin, and Senegal, but also showed that I am indeed 6.25 percent Irish and have many white cousins I never knew I had.

Testing results for Deb Leamy and Joe DeMarco of San Francisco were not so well received, however. In August, Leamy, a choreographer, purchased two kits from MyHeritage before a trip to DeMarco’s ancestral home of Sicily. Leamy had known her background to be half Italian, half Irish. But her test showed a high percentage Ashkenazi Jew, some west Asian roots, and very little Italian. Results for DeMarco, who works in software sales in Emeryville, were equally surprising: 55 percent Italian, but also Jewish and 25 percent Persian.

“We were shocked,” Leamy said. “My whole life, I’ve been thinking Italian was my identity, and I’m barely Italian? My brother was reeling from this, so he did his own test through Ancestry.com, and it was totally different: 39 percent Italian and Greek, 34 percent Irish and English, a little Jewish — much more what I expected my results to be.”

DeMarco now gives little credence to the tests. “Your heritage is more about how you were raised,” he said. “We grew up Italian, no matter what our DNA says. Plus, with these tests, you need a Ph.D to really understand the results.”

Indeed, DNA testing is easier done than said, at least on the consumer’s end. While the test begins simply enough — either swabbing a cheek or spitting into a small vial, then mailing it to the company — complicated processes follow, involving genomic databases, genotyping variants, single-nucleotide polymorphisms, and more.

Companies compare results with public ancestry databases, such as the Human Genome Diversity Project, but they also use their own information gathered from their customers — basically, the more people who submit samples, the more genetic information is available for comparison. AncestryDNA touts the largest customer database at 5 million users, and 23andMe claims 2 million.

“Each company uses a different algorithm to determine the probability or likelihood that your ancestors came from a certain region,” said David Magnus, director of the Stanford Center for Biomedical Ethics. “These are estimates about your ethnicity, not absolute results.”

Genealogy researchers at the Oakland Family Search Library, one of the largest centers for genealogical study in the state, say DNA testing kits are great tools, but they don’t provide the whole story. “You can’t just do DNA and expect your full pedigree will unfold before your eyes,” said Sue Severson, a staff DNA-research expert who teaches free genealogy research classes. She has taken four of the big-name tests herself. “If you’re trying to build a family tree, you still need traditional research methods,” she said. “But the DNA tests have helped in a big way. Personally, it’s helped me break through a couple of brick walls where there was no paper trail. But I look at it as more of a guidance tool, to help focus your research.”

Magnus also warns of unexpected social consequences that may arise through the matching services some companies offer, in which customers can opt to connect with potential relatives in their DNA pool. He noted a colleague who discovered a previously unknown half-sibling, which threw an inheritance issue into flux. “You might find out things you don’t want to know,” he said.

Though there could be startling revelations, Eileen Abrams, a longtime Oakland resident who recently retired and moved to Vancouver, feels everyone has the right to know their history. She’s had her DNA tested three times during the past decade, and took her most recent test through 23andMe last summer. She gave her consent to be matched with potential relatives and was immediately contacted by a young man looking for his birth father, who had apparently been a sperm donor. “I had worked as a volunteer for the Oakland Police Department for five years in CID, and I love doing detective work. So, this was right up my alley,” she said.

She contacted a cousin who admitted he’d been a donor decades ago and was likely the young man’s father. But he wanted nothing to do with the man. “I think it would be an intrusion in his new life,” she said. “But at least for this young man, it gives him some closure. He knows his bloodline, which I think everybody has the right to know.”

But who else does? Some worry that, when companies sell user data to third-party research, pharmaceutical, and even marketing companies, the information — even when anonymized — may be at risk. In November, U.S. Sen. Chuck Schumer, D-N.Y., called for more scrutiny into the popular DNA kits, asking the Federal Trade Commission to examine privacy policies and “take a serious look at this relatively new kind of service,” he said.

Ancestry.com clarified its policies last year, saying in part: “We explicitly state that we will not share your genetic data with employers, insurance providers, or third-party marketers without first getting your consent.”

Mountain View-based 23andMe is the only major ancestry firm to offer an option for genetic health screenings, which can reveal predisposed medical issues. Katie Black, the company’s privacy officer, said the sensitive nature of the information is top of mind. “We let people know they have control over their information,” she said. “On a basic level, when signing up, you consent for the information to be used only to populate your individual reports. But customers can opt to participate voluntarily in our research programs. All the information in our research environment is de-identified — no name, email, or other ID.”

Customers should also keep an eye out for potential scams. Cathy McCause Fuss of Martinez bought several DNA kits for several family members through Groupon in 2016. The tests were with AncestryByDNA.com — the “by” in the company name made it easily confused with AncestryDNA.com, but is not affiliated. AncestryByDNA now appears defunct, according to its website.

“My report came back saying I was Syrian and basically of Middle Eastern descent, which goes completely against what I was told by many generations in my family,” she said. “I did another test with 23andMe, and it was the total opposite result. It said British, Scottish, Irish, French, and at least a 16th Native American, which was in line with what I’d been told.”

She felt the first results were so off that she complained to the company to no avail. Then she got the wild idea to submit her dog’s saliva. “I had one test left, so I sent in a swab from our Japanese Shiba Inu. Lo and behold, they didn’t identify it as dog DNA. And they said he’s British!”