The pianist’s first big break got him established on a journey that took him from Jamaica to Yoshi’s. 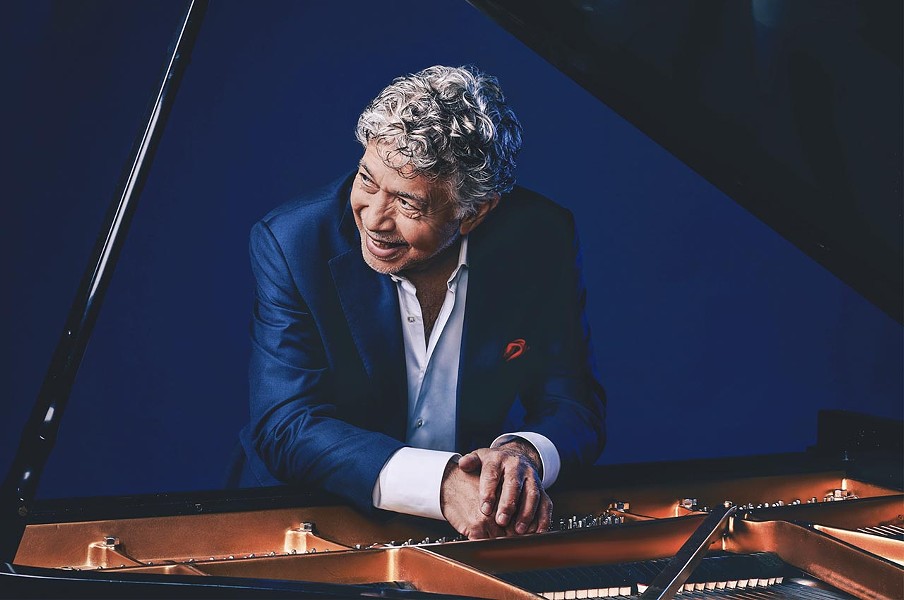 Frank Sinatra always had a great ear for jazz. So when Ol' Blue Eyes walked into a Las Vegas lounge one night in 1963 and heard an extroverted young pianist with a ferocious sense of swing, it's hardly surprising he felt compelled to offer the young musician some encouragement. It turned out to be Monty Alexander's first big break.

The 18-year old Jamaican immigrant had arrived in the U.S. the previous year, a self-taught player inspired by Oscar Peterson and Nat Cole. Sinatra and his buddy, Manhattan club owner Jilly Rizzo, came in to hear another performer "and I was playing the piano in the other lounge," recalls Alexander, 75, who performs at Yoshi's Wednesday, Aug. 7 with his trio featuring longtime bassist J.J. Shakur and drummer Jason Brown.

"They saw me playing hard and all enthusiastic, and Frank came up to me and said 'Hey kid, I like what you're doing.' He said 'Let's get him to play in New York.' They sent me an airline ticket and I got hired at Jilly's Saloon. It was all because of Sinatra's opinion."

It was hardly the last time that the pianist impressed legendary musicians. With a regular gig at Jilly's from 1963-67, he became part of the New York scene and formed close friendships with vibraphone master Milt Jackson and bassist Ray Brown. By the end of the '60s he had recorded a series of memorable albums for Pacific Jazz, RCA, and Verve that captured a sensational young player who'd earned a spot alongside his musical role models.

"Observing my heroes, and having the opportunity to spend time with them gave me the confidence, the sense of knowing that when you play a note, that's the only note to play at that moment," Alexander said. "When Ray Brown and Milt had me with them on the bandstand, I became part of the whole thing."

Something of a prodigy, Alexander started studying the piano at six and grew up listening to calypso bands playing by the tourist hotels in Kingston. While still a teenager he formed a popular band Monty and the Cyclones, and often worked with guitarist Ernest Ranglin, a formidable jazz musician best known as a foundational figure in ska and reggae. Some of that West Indian rhythmic feel seeped into his jazz playing, infusing his virtuosic style with a particularly joyful bounce.

Even while he was becoming a jazz star in the States, Alexander always kept in touch with musical developments back home. One of the first albums he recorded for Concord Jazz, 1980's Ivory & Steel, documented his band with Trinidadian steel drum master Othello Molineaux. More recently he recorded several beautiful reggae/jazz albums for Telarc, such as 2000's Monty Meets Sly and Robbie (a persuasively grooving session with the great reggae rhythm section tandem of drummer Sly Dunbar and bassist Robbie Shakespeare) and 2004's Rocksteady with his old compatriot Ernest Ranglin.

Whether playing reggae-infused lines with fellow Jamaicans or leading a straight ahead jazz trio, Alexander is an exhilarating improviser with a rare gift for communicating boundless delight. "The Jamaican thing is such a strong root for me," Alexander said. "When we play on those simple chord changes, the joy is coming from the essence of that music's spirit. I'm a Jamaican who tuned into American jazz music from my early teens. But I was enjoying our local offerings just as much when I was checking out jazz. They're both equally meaningful to me."

The affection between Alexander and Jamaica has been mutual. Last year the University of the West Indies bestowed on him an honorary Doctorate (alongside the ever-spectacular Grace Jones, a fellow native Jamaican), and in 2010 Jamaican Prime Minister P.J. Patterson awarded him the Commander of Distinction title for his musical contributions. He presents his latest jazz/reggae mashup in Walnut Creek Aug. 10 as part of the expertly curated Jazz at Lesher series with his Harlem Kingston Express (the group also performs at San Jose Jazz's Summer Fest on Sunday afternoon Aug. 11).

In many ways, Alexander highlights the rhythmic currents that Monk absorbed as an adolescent after his family moved from North Carolina to Harlem where he lived amongst Jamaicans, Trinidadians, and Barbadians. "Listening to his music," Alexander said, "I'm convinced he had a lot of experience with people and music from the islands."