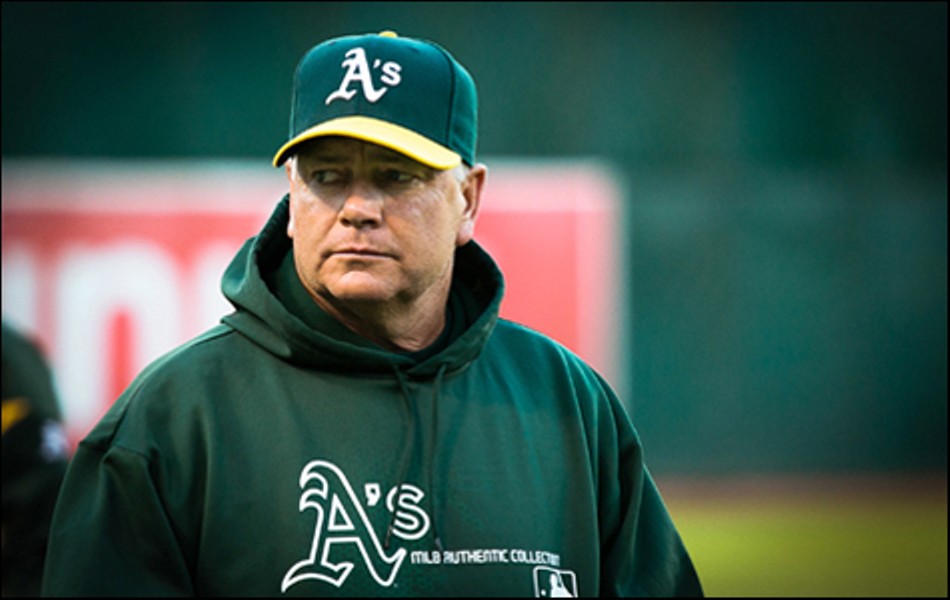 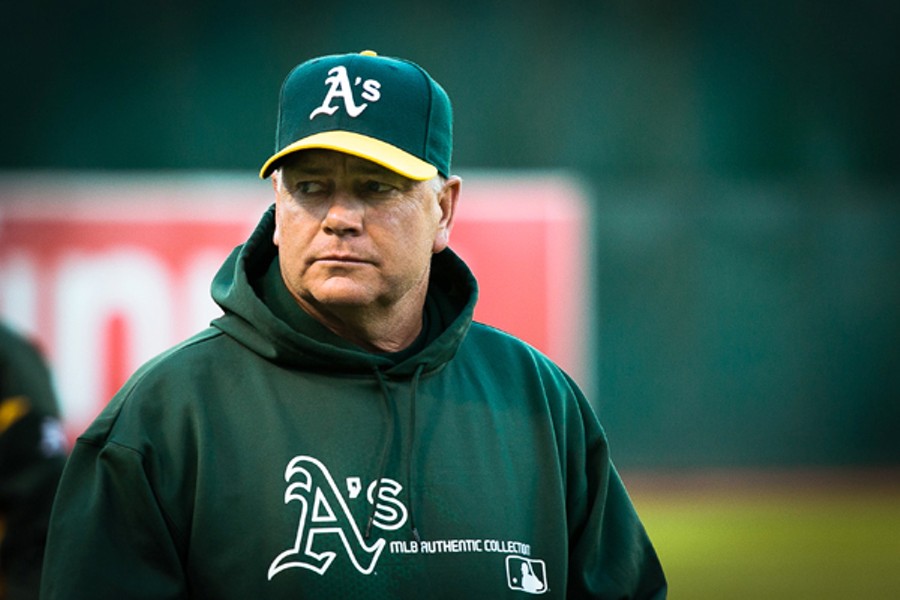 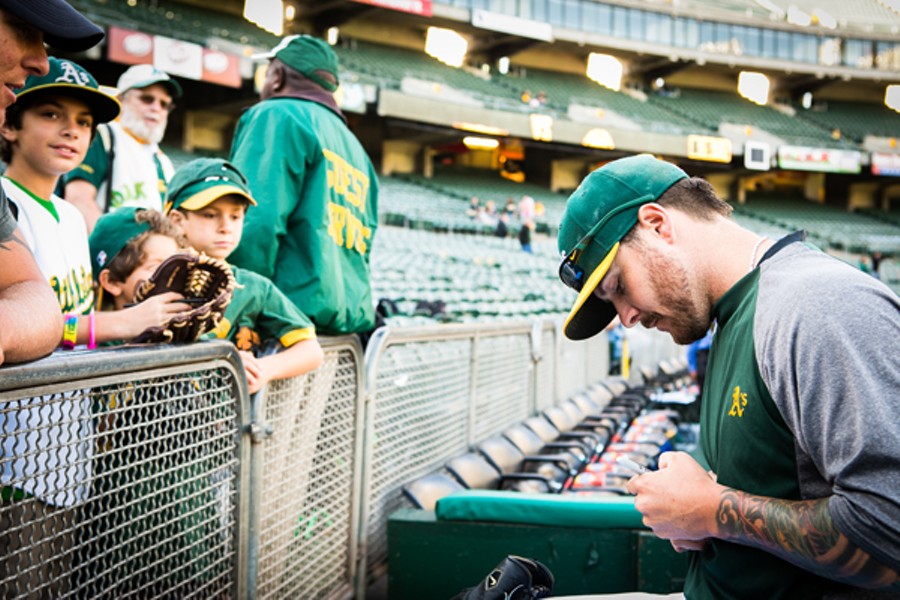 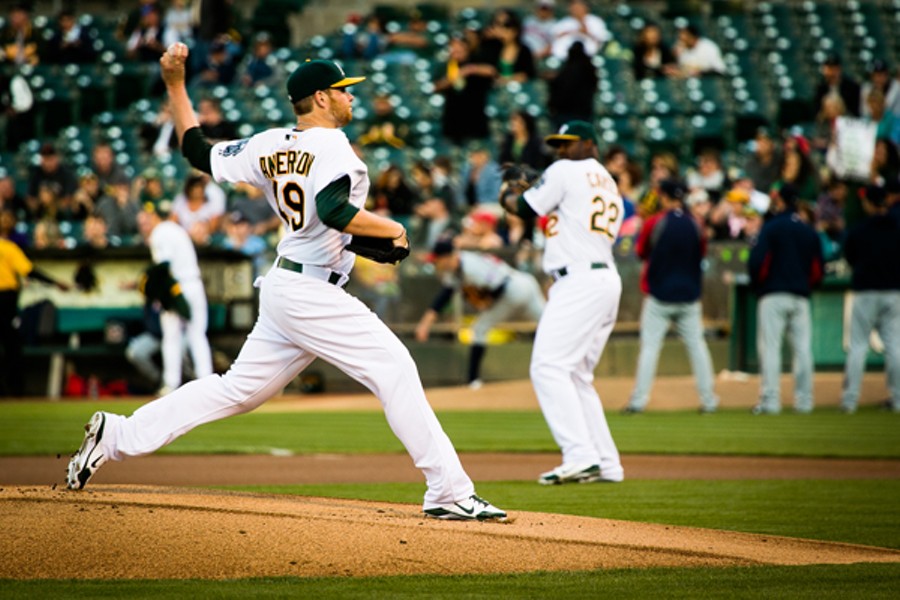 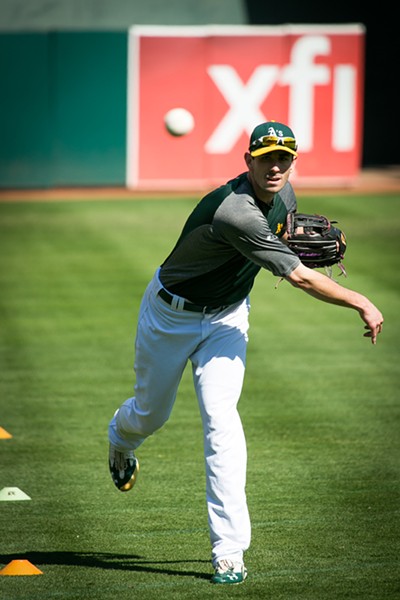 Young came over to the wallflower section and sat at a table, gripping a paper cup with his left, pitching hand. We started with something simple. What were the plans for that night's starting pitcher, Tommy Milone, in terms of how he was going to pitch to Tampa Bay? Young paused: "I'd rather not say. We keep that information kind of private."

Young was never less than patient, and was more than generous with his time, but it was the unspoken response that spoke most eloquently after we parted ways. The trust, the bond, the brotherhood of Curt Young and his pitchers is sacrosanct. Never mind the fact that the inquisitor was a civilian who couldn't distinguish a slider from a screwball, writing for a publication that wouldn't hit print for six weeks, and is probably not being scanned by other big league teams; Young was not going to reveal too much about what he tells his pitchers.

Young also speaks to his players in a language only they seem able to hear. They say Young gives them confidence, that he believes in them, that he simplifies the task in their hands, that he communicates with them in the way that matters the most. "Curt is very soft-spoken, quiet, so when he does say something to you, and it may not be a lot, it's important," said relief pitcher Sean Doolittle.

"You realize, of course, that all of these guys have talent," Young said, sweeping his hand in an arc around the clubhouse. "The talent is already there."

Young said that the night's starter, Milone, was going to throw to a brand-new catcher, just acquired two days before. "Tommy is going to talk to [George] Kattaras about the Tampa Bay lineup, about what their strengths are up and down the batting order. He'll go over how he wants to pitch to them differently the second or third time through the game," Young said. "Tom knows his game, he knows his strength, and he'll explain that to George as well."

Young's brief sketch of rookie Milone, I suspect, could be replicated for any or all of the dozen pitchers who make up the Oakland A's starting staff and bullpen. And it is confirmed by the players themselves, who said again and again that the low-key speaker who sat across the table before the game, slightly shifting his left-handed grip on a paper cup, doesn't coach them; he knows them.

The Oakland A's had decent pitching through all the years they wandered the hardball desert. The ballpark they play half their games in, derided as the "Mausoleum," has nearly enough foul territory to build another ballpark in. That means balls hit out of play in every other stadium have a greater chance of finding a glove, and the pitcher, finding a groove.

But this year, only one starter, Tommy "Mayday" Milone, had been healthy or hearty enough to make all of his scheduled starts. And Milone's claim to fame had nothing to do with his pitching. Last year, Milone became one of a few big leaguers to hit a home run on the very first pitch he ever saw in The Show. Nice, but for a pitcher not named Babe Ruth, it's kind of getting your priorities backward. In the American League, where Milone and the A's make their home, the pitchers don't even hit, rendering the former USC lefty's gift one best left under the tree.

Other starters either began the season late for Oakland or exited it early. The whole idea of a starting staff is about stability and routine. At the prices the A's were paying their pitchers, it became clear that stability and routine were luxury items. Bartolo Colon, 39, won ten games and seemingly had drunk from the fountain of youth, though looking at his physique and noting that he got injured and missed three weeks of the season while bending down to field a bunt, maybe he had been drinking from a fountain of chocolate instead.

Opening Day starter Brandon McCarthy won kudos for his stance against the ballpark perennial between-innings foolishness of the Kiss Cam, which typically featured ballpark attendees, framed as pairs while other fans make noise until the two lock lips on video. McCarthy found the typical last image of this featurette — two visiting ballplayers sitting together, then being whooped into (or against) smacking lips — homophobic and offensive, and said something about it. The A's listened, and ceased its practice. (Maybe next year, someone can take up the cudgel against Dot Racing?)

April starters Tyson Ross ("The East Bay Express") and Graham Godfrey didn't make it through May, meaning the A's' B-team was called in to rescue an underwhelming plan A. Maybe this iteration of the Moneyball philosophy has been to recognize that if the A's can't afford the best players, perhaps they can collect the most.

This year, Oakland has used eleven rookie pitchers, and has shuttled in several centerfielders, a plethora of third basemen, and more first baseman than could fit on the base. By May, the A's had introduced new pitchers Jarrod Parker, A.J. Griffin, Travis Blackley, and Dan Straily, who are not even household names in their own homes. The most heralded, Parker, available after being disabled for a year and a half after Tommy John ACL surgery, couldn't crack the Big Leagues on Opening Day.