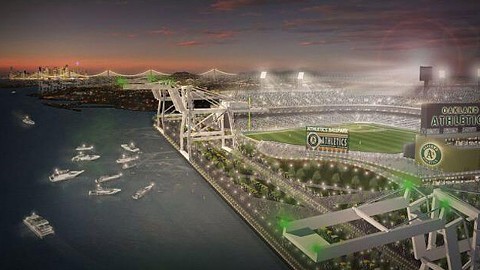 1. Oakland teachers are set to strike this Thursday. The union is demanding a 12 percent raise spread over 3 years, while negotiators for the Oakland Unified School District are offering 5 percent.

2. Forces are lining up to place obstacles for the A’s proposed ballpark at Howard Terminal, Phil Matier reports in the San Francisco Chronicle. The environmental group Save the Bay is raising questions as are neighboring tenants at the Port of Oakland. $$

3. The past few weeks of heavy Bay Area rainfall is alleviating any short-term fears of drought. The San Jose Mercury news reports recent wet weather has pushed the region’s rainfall total above 100 percent of normal.

4. The marquee at the Grand Lake Theater continues to be voice of Oakland’s resistance against President Trump. A day after Trump announced a national emergency on the southern border, Grand Lake theater owner Alan Michaan’s marquee read, "We have 4 actual national emergencies. Climate change, fake elections, guns, and a lying traitorous criminal president."