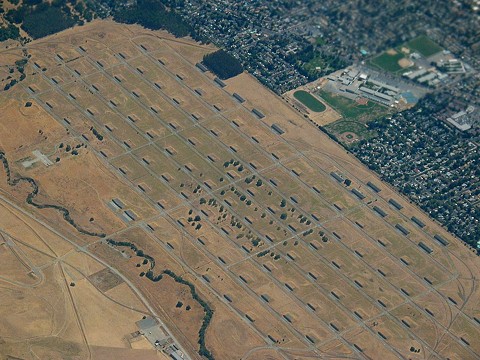 The federal government is considering setting up a detention camp for immigrants looking to obtain asylum at Concord’s shuttered naval base. According to a draft memo by the U.S. Navy obtained Friday, the “temporary and austere” tent city would hold up to 47,000 immigrants apprehended at the southern border. (East Bay Times)

A Black firefighter conducting city-mandated inspections around homes in the Oakland hills was reported to police and also questioned and videotaped by a suspicious resident, even though he was in full uniform with his fire truck parked nearby. (SFGate)

Over the weekend, video surfaced of a white woman allegedly calling the police on an 8-year-old Black girl for selling water outside AT&T Park without a permit. #PermitPatty, as she is being called on Twitter, has been identified as Alison Ettel of Treatwell Health, a San Francisco company that makes cannabis edibles. (East Bay Times)

Staff at Hs Lordships walked off the job during brunch service yesterday afternoon in protest of their severance pay. According to customers, an employee announced that they were only getting $21 per year of employment in severance pay, so they decided to take their breaks all at once but then were not allowed back to work. The Berkeley Marina restaurant is closing permanently on July 1. (SFGate)

In the East Bay, a family of four with a household income of $89,600 is now considered low-income, qualifying them for certain affordable housing programs, according to the U.S. Department of Housing and Urban Development. In San Francisco, Marin, and San Mateo counties, residents who make $117,400 are considered low-income — the highest threshold in the country. (East Bay Times)

One of Oakland’s oldest restaurants, Mexicali Rose, is closing after 91 years in business. The restaurant owner cited retirement as the reason the Old Oakland eatery's last day will be June 29. (East Bay Times)

A startup in Alameda is developing a ferry boat powered by hydrogen fuel cells. Golden Gate Zero Emission Marine received a $3 million state grant to build the fuel-cell ferry, which is expected to hit the waters of San Francisco Bay in fall 2019. (San Francisco Chronicle)

An 8,200-acre fire is burning in Lake County, destroying 22 structures and threatening at least 600 more, according to officials. Thousands of people have been evacuated. (San Francisco Chronicle)
Prev
Next