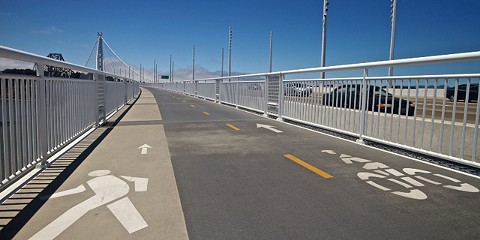 The bicycle and pedestrian path on the eastern span of the Bay Bridge will be open 24 hours per day starting Thursday until Saturday, May 19, at 9 p.m. The new hours are a test to see how 24-hour operation might become permanent. Currently, the 2.2-mile path between Oakland and Yerba Buena Island is only open between 6 a.m. and 9 p.m. (San Francisco Chronicle)

Health care workers at UCSF and other facilities in the UC system are going on strike today until Wednesday to protest racial and gender pay disparities, as well as UC’s offer of 3 percent annual raises over four years. Some surgeries and cancer treatments are being rescheduled. (San Francisco Chronicle)

Proposed legislation by Sen. Nancy Skinner (D-Berkeley) would require hospitals, care facilities, and state prisons to offer full vegan meals on their menus. So far, the bill has passed through both the Senate Health and Public Safety committees with unanimous bipartisan support. (San Francisco Chronicle)

As the end of the semester approaches, the City of Berkeley announced it will fine students who leave trash and furniture on sidewalks up to $1,000 per day. For those looking to get rid of things, the Berkeley Student Cooperative will allow students to drop off and pick up gently used furniture and items in the southwest parking lot of the Clark Kerr Campus the last two weekends of May and the first weekend of June. It also will provide a free pick-up service by appointment. (Daily Cal)

Pre-fabricated housing is gaining in interest among Bay Area developers as they try to speed up the pace of construction, cut building costs, and create desperately needed housing. Pre-fabricated or modular housing can cut construction costs by about 20 percent and built in about half the time. (East Bay Times)