Monday Must Reads: Some Parts of Bay Area Get 10 Inches of Rain; BART Pulls Plug on New Power Station

1. The major storm that walloped the Bay Area and the Central Coast over the weekend dumped up to ten inches of rain on certain parts of the region, the Chron reports. The storm caused flooding and downed trees and power lines throughout the region and forced evacuations in Santa Cruz County. The Sierra Nevada was also hard-hit by the big storm, with blizzard-like conditions causing the closure of Interstate 80 for a time. 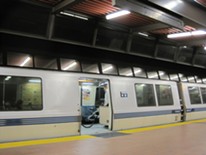 2. BART shut down a new multimillion-dollar power substation in West Oakland after about eighty train cars had to be taken off line because of electrical failures, the Chron reports. BART officials believe the power substation may have been delivering power surges to train cars, shorting out their propulsion systems. Since BART pulled the plug on the station, the number of train cars forced out of service has plummeted.

3. Hundreds of wastewater pits, filled with toxic substances generated by oil and gas drilling in California, are threatening the state’s groundwater supplies, the Chron$ reports, citing a new study from the Oakland-based environmental group, Clean Water Action. The group notes that state regulators have failed to properly monitor the big open pits, many of which have been in operation for decades.

5. Congress members from the Bay Area have introduced legislation that would provide $130 million in federal disaster relief funds for the state’s crab fishing industry, which has been devastated this year, the Chron reports. The commercial Dungeness crab season has been closed all winter because a neurotoxin infected the crabs.

6. And Democratic presidential candidate Bernie Sanders won three of the four contested primaries and caucuses over the weekend, The New York Times$ reports. Sanders won in Maine, Nebraska, and Kansas, while Hillary Clinton won in Louisiana.