Monday Must Reads: PG&E Failed to Do Seismic Tests at Diablo Canyon; Water Agencies Consider Rate Hike Because of Drought 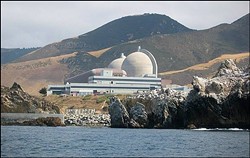 1. PG&E failed to conduct seismic tests at Diablo Canyon nuclear power plant near San Luis Obispo before installing $842 million in upgrades, the Chron$ reports. The US Nuclear Regulatory Commission, which oversees the nation’s nuclear plants, also failed to catch PG&E’s mistake. In addition, the California Public Utilities Commission, which is supposed to regulate PG&E, had no idea that the utility had failed to conduct the seismic tests. PG&E’s error raises further questions about the safety of the plant, which is close to two earthquake faults.

2. Bay Area water agencies, including East Bay MUD, are considering rate hikes because of the drought, the Mercury News$ reports. Water officials say they’ve had to buy water from other sources. In addition, consumer cutbacks on water use have left the agencies with deep budget deficits.

3. State Fish and Wildlife Department officials say that Caltrans’ plans to blow up one of the old piers from the old Bay Bridge could decimate a protected fish — the Longfin smelt — that is on the brink of collapse because of the drought, the Chron reports.

4. The Oakland school district has suspended two security officers after the disclosure of a video showed the officers beating up a student at Fremont High School, the Chron reports.

5. The state Republican Party has filed a lawsuit against a Democratic group that funded a mailer in the East Bay, urging voters in the Seventh state senate district to cast ballots for a GOP candidate who has dropped out of the race, the SacBee$ reports. Republicans say the deceptive mailer is designed to siphon votes away from centrist Democrat Steve Glazer, who is now favored by GOP in the district because there is no longer a Republican candidate in the race.

7. And the National Park Service is considering moving the Alcatraz ferry terminal in San Francisco from Fishermen’s Wharf to Fort Mason, because of a lease dispute, the Chron$ reports.