1. President Obama unveiled his new plan for requiring wealthy Americans to finally pay their fair share of taxes. The president dubbed the proposal the “Buffett Rule,” after billionaire Warren Buffett, who has noted that he pays a lower tax rate than his secretary under current IRS loopholes. Republicans immediately decried the plan, calling it “class warfare,” to which the president responded: “This is not class warfare; it’s math,” noting that it’s not mathematically possible to make a substantial dent in the nation’s budget deficit without new revenues. 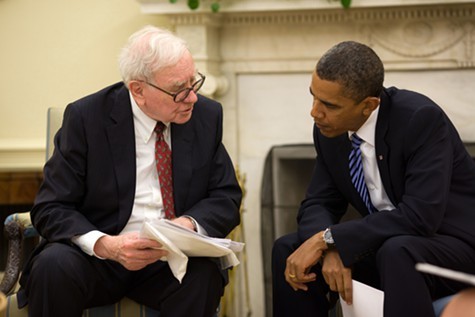 The president’s plan would slash the deficit by $3 trillion over the next decade. Obama also vowed to veto any legislation that calls for more cuts without higher taxes on the rich.

2. The California GOP convention, meanwhile, turned sharply toward the Tea Party over the weekend, as Congressman Ron Paul won the Republican presidential straw poll by a big margin, the Chron reports. The GOP also rejected a platform by party moderates that focused mostly on the economy, and instead embraced red-meat issues, such as opposition to abortion and gay marriage, AP reports.

3. BART’s new general manager, Grace Crunican, says she’s ready to sit-down with protesters who have been demonstrating against the agency for more than a month, the Chron reports. Crunican has already reached out to members of the ACLU and other groups who raised concerns about the shooting of a homeless man in July and criticized BART’s decision to kill cellphone service in an attempt to disrupt a protest.

4. The San Francisco Bay is cleaner than it has been in years, but the Sacramento-San Joaquin River Delta is increasingly in peril because of freshwater diversions for Central Valley agriculture and for Southern California residents, the Mercury News reports, citing a new study funded largely by the US Environmental Protection Agency.

5. And the concept of “restorative justice” is being embraced strongly by candidates in the San Francisco District Attorney’s race, the Bay Citizen reports. Restorative justice programs require offenders to confront their victims and community members to discuss the impacts of what they’ve done.