1. President Obama has abandoned his pledge for a debt-ceiling deal that would include both spending cuts and revenue increases, and capitulated to ultra-conservative GOP legislators who threatened to force the federal government into default if he continued to try to close corporate tax loopholes, the Washington Post reports. The president had repeatedly promised that he would not agree to a deal unless it included some revenue increases, but then gave up the fight — as he has done throughout his presidency — when faced with Republicans who were willing to do whatever was necessary to protect corporations and the wealthy from having to pay more taxes. 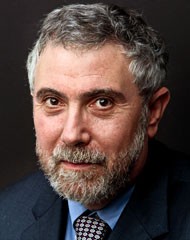 2. Nobel Prize economist Paul Krugman is calling the Obama surrender a “disaster” for the economy, noting that massive cuts to federal government spending is the worst possible move during an economic downturn. Cuts in federal spending likely will further depress the economy, and thus result in even less tax revenues, thereby worsening the nation’s budget deficit. “Make no mistake about it, what we’re witnessing here is a catastrophe on multiple levels,” Krugman notes in today's New York Times.

3. California’s three-strikes mandatory sentencing law is costing the cash-strapped state lots of money, especially when people are convicted of their so-called “second strike” offense and sentenced to long stretches in prison, the Chron reports. There are currently more than 32,000 people in state prison on second strike offenses, greatly driving up the costs of California’s already out-of-control prison spending problem.

4. Oakland Councilmembers Larry Reid and Rebecca Kaplan are pushing a plan to transform the Oakland Coliseum area into a major transit and entertainment village, known as Oakland Live, the Trib reports. The plan could include a new stadium for the Raiders — and possibly the San Francisco 49ers — and the city council has already approved a proposal to spend $4 million in redevelopment funds to develop the plan and conduct an environmental impact report.

5. And many residents in Oakland’s Rockridge district are opposing a plan by Safeway to dramatically increase the size of its supermarket at College and Claremont avenues, saying it’s simply too large for the area, the Chron reports.