How Oakland is getting scooter regulation right — and changing the complexion of urban transportation. 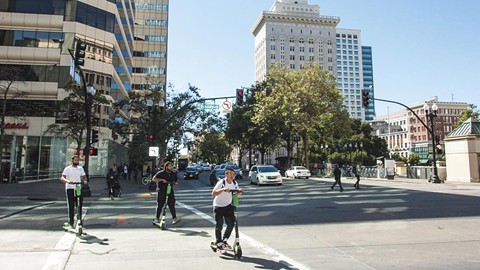 Remi Burnaby wanted to get from downtown Oakland to the Grand Lake Theater last Wednesday, so he used his phone to rent a Lime e-scooter — one of several dozen lined up on the sidewalk at Broadway and 20th Street. In the year since the devices proliferated throughout downtown after being unceremoniously ejected from San Francisco, Burnaby's relationship with mobility has been transformed. "Once you master the potholes, then you're set," he said. A middle-aged man of Southeast Asian descent, he was previously accustomed to a longer, less-reliable commute to the theater via public transit. "It's faster than waiting for the bus, and the price is almost the same."

Shortly after Burnaby scooted away down 20th Street, a Latino man in a crisp black dress shirt kicked down the long row of scooters, which toppled like dominos onto the sidewalk. Before entering the 19th Street BART Station, he muttered in apparent justification a familiar one-word perjorative — "gentrification!" Having also evidently recorded his performance on an iPhone, the man played the recording back to himself as he descended into the station, his distorted battle cry echoing through the tiny speakers.

As technology brings new transportation options to booming cities strained beyond capacity with traffic, the contrasting attitudes of Burnaby and the scooter vandal symbolize the disparate ways that Oakland and San Francisco have regulated electric scooter rentals.

Policymakers and activists in both cities are united by a concern that these new transit options aren't just reserved for the whitest and wealthiest residents. But where San Francisco has failed to advance that worthy goal, Oakland's more pragmatic approach is producing real results.

In San Francisco, kneejerk political rancor has yielded strict policies that merely reinforce the city's racial and class-based transportation disparities. Yet in Oakland, city officials have embraced scooters with an openness that already has led to visible changes in the complexion of urban mobility.

Earlier this month, Oakland's Department of Transportation issued permits to four companies renting a total of 3,500 electric scooters in the city. Those companies — Bird, Lime, Clevr, and Lyft — will be required to enforce rules against sidewalk riding and unpermitted parking, and to eventually provide alternative payment options besides just smartphones.

Meanwhile, with just 1,250 of the devices serving a much larger population in San Francisco — not to mention an even larger commuter population — scooters are less reliable, and virtually none are available outside of denser neighborhoods close to downtown. Not surprisingly, scooter usage in the city shows little signs of expanding beyond the tech community.

How did San Francisco get transportation equity so wrong? And what has Oakland learned from the larger city's mistakes?

Mobility advocates in the gridlocked West Bay say San Francisco's permitting system was destined to fail, since it followed a more punitive and reactive framework that Oakland has largely avoided. After three companies distributed scooters in San Francisco prior to the city's creation of a pilot program, the city issued a cease-and-desist order to remove the scooters before the permits were developed. None of those three companies — Bird, Lime, and Spin — ultimately received permits, and one of the companies that was eventually approved lobbied for its scarce permits partly by complaining about its competitors having jumped the gun.

In the fall of 2018, San Francisco granted the companies Skip and Scoot permits for just 1,250 scooters. Although this pilot program was set to double to 2,500 after the first year, its expansion was put on hold due when the operators fell short of their promises to equitably serve low-income neighborhoods and communities of color.

According to data from the San Francisco Municipal Transportation Agency, more than 60 percent of scooter riders during the pilot period were white, and earned above $100,000 per year, respectively. Out tens of thousands of riders, only 68 low-income residents have signed up for Scoot's discount program, and only 78 for Skip. San Francisco vows it will not grant more permits until its low-income enrollment numbers improve, per the terms of the pilot program.

"We were disappointed that subpar companies got those permits," said Maelig Morvan, an Outer Sunset resident and volunteer organizer with the group Westside=Best Side. "None of them reached out to us on the westside, and of course now they only operate around downtown, with no intention of covering our underserved neighborhoods." Instead, Morvan lamented, "the Sunset has become one of the least safe and amenable neighborhoods for walking, biking, and now riding scooters."

African-American community leaders from Bayview and the Western Addition made similar allegations about their neighborhoods at a Board of Supervisors hearing.

In a letter of support sent to the San Francisco Municipal Transportation Agency, Morvan's group joined groups from the Bayview and Richmond Districts to lobby in support of Lime's scooter permit application. Morvan said Lime was "the only company that has proactively reached out to us, before even launching, to listen to our concerns about our limited available mobility options," and was the sole applicant to include "an equitable deployment strategy" for far-flung residential neighborhoods.

So when officials in Oakland first rolled out their own scooter regulations last September, they pointedly did not remove the estimated 2,000 scooters available before permits were issued. They also took other proactive steps to coordinate community outreach.

"Just anecdotally, we saw that scooters were adopted widely by all people — you saw lots of black and brown people on scooters, not just wealthy white people," said Danielle Dai, mobility management supervisor for Oakland's Department of Transportation. "As a department focused on equity, to get rid of them with a cease-and-desist order, it wouldn't have met our goals to make sure that Oaklanders have options to get around."