If we were to embroider the impact of filmmaker Mauro Herce's Dead Slow Ahead we might claim that it marries the poetry of machinery to the majesty of the open sea, or some such. But Herce's doc is the very picture of industrial, a low-lit tapestry of ill-defined shapes and dim vistas as seen from the cargo ship Fair Lady, carrying grain to an unnamed destination. In the narrationless (natch) film, the glimpses of the crew's human activity aboard the ship come as a welcome relief, even when all they're doing is eating lunch or studying charts. Aside from occasional procedural talk and horseplay by the men, the prevailing sounds are the beeps and hums of machinery and ping-y echoes of the ship's superstructure. The wheat-filled cargo hold looks like a desert. So much for swashbuckling adventures afloat. Seafaring in the 21st century isn't like that, which is probably the Spanish director/camera operator Herce's point. Still, you might want to bring a large coffee into the auditorium when Dead Slow Ahead plays the Alamo (on April 23 and 29, and May 2), just to keep yourself awake.

Young children should not wander into a screening of Canadian writer-director Philippe Lesage's The Demons. Lesage's understated shocker is not a horror flick, at least not in any conventional way (despite its title), but it could nevertheless make them afraid to ever be ten years old. It's not just that Félix (Édouard Tremblay-Grenier) is bullied; it's as if he has been selected ahead of time for some unknown dire fate. From the sinister classical music over the sequence of children's calisthenics in the opening credits, to the odd birthday party, cruel locker-room pranks, and frightening swim instructor, the elements of Félix's early adolescence are the stuff of sleep-disturbing urban legends. The film's music track underscores the trepidation, with Jean Sibelius' Finlandia Op. 26 and Robert Johnson's "Me and the Devil" taking the lead. The Demons makes audiences sweat April 28 and May 2 at the Alamo, May 4 at the Roxie.

Who among us is not at least slightly curious about North Korea? What really goes on there? How do people live their everyday lives? Ukrainian documentarian Vitaly Mansky gamely attempts to answer some of those questions in Under the Sun, a filmed record of his visit to Pyongyang. "Attempt" is the key word. As the filmmaker embeds himself and his crew in the family of elementary school student Zin-mi, they are accompanied everywhere by a nervous apparatchik who forces everyone on camera to adhere to the government's pre-approved script, even to the point of rehearsing their "informal" scenes (such as family dinner) again and again, so as not to embarrass the state. Yet this regimented society the camera observes — mass calisthenics in the morning, "happy" factory workers, a celebration at the Children's Union, drill after drill — is the real Korea, or as close to it as we are likely to come. Under the Sun, a co-production of the Czech Republic, Russia, Germany, North Korea, and Latvia, shows April 30 and May 4 at the Alamo, and May 5 at BAMPFA. 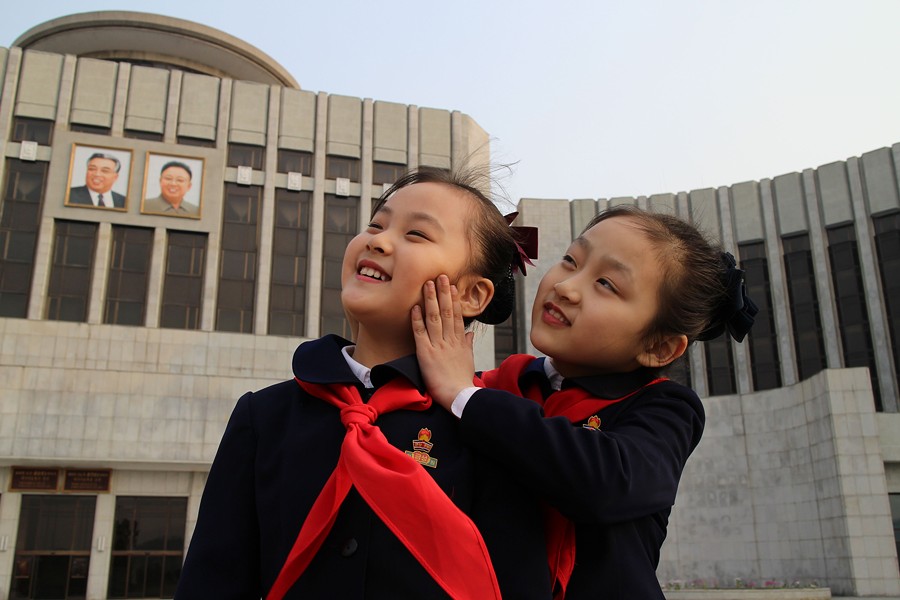 Compared to the North Korea on view in Under the Sun, life in contemporary China, as depicted in Du Haibin's documentary A Young Patriot, seems as carefree as life in Seattle or Santa Cruz. Our subject is a young man named Zhao Changtong from the town of Pingyao in Shanxi province. When we first meet him, he's dressed in a vintage People's Liberation Army uniform in the town's shopping district, shouting his devotion to Chairman Mao — more than twenty years after the death of the Great Helmsman. Zhao's zealous devotion to the Communist Party only takes him so far. In the five years that Du's doc profiles him, he struggles to go to university and make a living while his contemporaries enjoy hip-hop and having a good time. Eventually, the profit motive of the new China dawns on Zhao Changtong. No one else is waving the Red Guard banner, and he is moved to observe bitterly: "Why should we care when our government doesn't?" That's a good question. See A Young Patriot on April 24 at BAMPFA or on May 2 at the Alamo.

If we were to suggest a film for the festivalgoer who had time to watch only one, that film would be Pascale Breton's Suite Armoricaine, which screens April 30 at BAMPFA and May 1 at the Alamo. We hesitate to call Breton's multi-chambered character study Proustian — critics should generally refrain from slinging around that particular modifier. But the story of a disenchanted Parisian art historian named Françoise (played by actress Valérie Dréville) and her disconsolate relocation to a teaching post at Université de Rennes in her home province of Brittany, has much of the dreamlike flavor of Proust's homecomings, together with all the appropriate added 21st century aggravations. Kaou Langoët, Elina Löwensohn, and Laurent Sauvage costar as a few of those aggravations. Eric Duchamp's score and the needle-drop music selections are a further plus. Writer-director Breton, a French TV veteran with few feature film releases, is nevertheless a talent to be reckoned with.