The Internet all but imploded this morning after Public Radio International show This American Life issued a retraction for what had been one of its most popular shows ever, "Mr. Daisey Goes to the Apple Factory." It turned out that playwright Mike Daisey at least partially fabricated the story of his trip to Shenzhen to investigate execrable labor conditions at Apple's Foxconn factory, where many of of the companies products are manufactured. Reporter Rob Schmitz of American Public Media's Marketplace has combed through the story and raised many doubts about Daisey's anecdotes. This American Life will devote its entire program this weekend to Schmitz' findings — the broadcast is currently embargoed on the station's website. However, you can read Schmitz' account here. 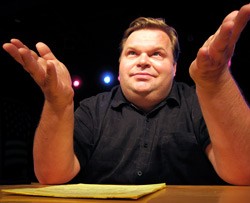 Mike Daisey originally presented the Foxconn story in a wildly popular monologue called The Agony and Ecstasy of Steve Jobs, which toured at Berkeley Repertory Theatre last year and received adoring reviews from many critics, including this one. The play recently wrapped up a run at New York's Public Theatre and was slated to hit the UK this spring. Daisey also wrote an Op-Ed and encomium, of sorts, for New York Times shortly after Jobs' death. His play had many reverberative affects in the fight against Apple's unfair labor practices, and may have led to a front-page New York Times evisceration of the company that ran a couple months ago. Daisey also got credit for shaming Apple into eventually disclosing its list of suppliers.

The spurned monologist released his own statement this morning. "I stand by my work," he wrote. "My show is a theatrical piece whose goal is to create a human connection between our gorgeous devices and the brutal circumstances from which they emerge. It uses a combination of fact, memoir, and dramatic license to tell its story, and I believe it does so with integrity."

Still, he was unable to stem the tide of public disparagement from an extremely widespread and increasingly rankled audience. This American Life removed the original show from its website.