Luke Tsai Now with the Times' seal of approval.

1) Old Oakland’s trendiest wine bar, District (827 Washington St.), is opening up a takeout counter in the space behind the restaurant’s kitchen, on 9th Street, according to Inside Scoop. The takeout shop will be called District Carriage House, and it’ll be open from 11 a.m. to 1:30 p.m., serving sandwiches and a variety of other takeaway lunch items. No official opening date has been set, but it sounds like it’ll be early this year. 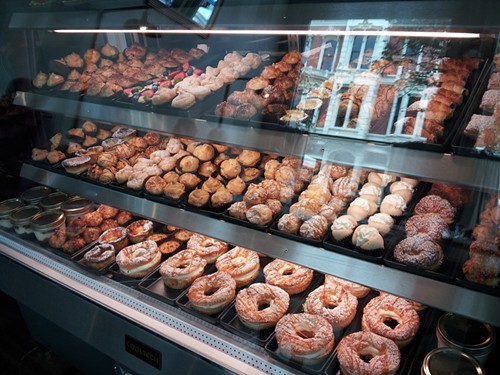 2) A reader wrote in with this bit of bad news: For the past several weeks, the much-ballyhooed pastry case at Borgo Italia (499 9th St.) has been completely empty. Co-owner Fabio Dalla Vache confirmed that his partner Franco Camboli, Borgo’s dessert guru, has had to be away from the restaurant for the time being due to a personal matter. But one way or another, Dalla Vache expects that Borgo Italia will get its dessert program up and running again in about a month or so. Stay tuned.


3) Lots of high-profile Oakland restaurant openings this month — places whose progress we’ve been tracking at What the Fork for the past several weeks. A few quick updates: The sausage specialist Rosamunde’s Old Oakland location (911 Washington St.) opens today, at 5 p.m. Over in Rockridge, Ramen Shop (5812 College Ave.) just had its opening weekend, and apparently the lines were bonkers — Inside Scoop reports they sold about 300 bowls a night. Finally, over in Uptown, Duende (468 19th St.), former Oliveto chef Paul Canales’ ambitious new Spanish restaurant/performance venue/bodega is set to have its official opening sometime next week — some pictures of the finished space over on Grub Street, and a shot of the menu on Eater.

4) The owners of San Francisco’s Tropisueño have opened a similar taqueria, El Gusano, in Old Oakland, at 1015 Clay St. — the space formerly occupied by Tatuyo and, before that, by the short-lived, Jesse Branstetter-helmed project that was simply called 1015 Clay. They’re serving mezcal and a kind of torta known as a pambazo, according to Eater. The restaurant opened on Monday and is open for lunch only this week, from 11 a.m. to 4 p.m.

5) Inside Scoop has a preview of Homestead (4029 Piedmont Ave.), the new farm-to-table restaurant that’s replacing Zatis on Piedmont Ave. The owners are Fred and Elizabeth Sassen, both formerly of Farallon in San Francisco. The basic concept: food that’s like what chefs cook at home. Homestead is aiming for an opening sometime in the spring; in the meantime, Zatis will probably remain open through the end of the month.

6) Lisa Holt and David Shapiro, owners of the Roman-style pizzeria that’s opening in the Berkeley building formerly occupied by Shattuck Down Low, have referred, several times, to a twist that the restaurant will have — something that will be unique in the Bay Area. Inside Scoop finally got them to reveal the concept: build-your-own pizza, basically. Oh, and they’ve changed the restaurant’s name, from A90 to Build (2286 Shattuck Ave.).

7) Berkeleyside notes a couple of new arrivals: Biondi’s Cafe, a “family and student oriented” cafe that’s being planned at 2360 Telegraph Ave — that one’s still going through the application process with the City of Berkeley. Meanwhile, Grazzy Burgers, a locally-sourced burger joint, is set to open in Albany next week, at 747 San Pablo Ave.

8) Oh, and I can’t believe I forgot to mention this: The bagels from Baron Baking (which you first read about here) got some love from The New York Times, in a piece praising owner Dan Graf’s “perfectly seasoned, brown, crusty, chewy” handiwork. If you still haven’t tried them (Stag’s Lunchette would be a good place to do it), now you really have no excuse.

9) Finally, ICYMI, this week's big news: Off the Grid is finally coming to Oakland — at the Oakland Museum. Also, both Oakland and Berkeley are gearing up for Restaurant Week.