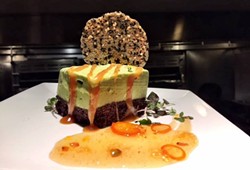 1) Oakland is now home to what is probably the Bay Area’s most well-known vegan fine-dining destination: Inside Scoop reports that Millennium Restaurant will softly open for dinner service this Thursday, June 4 in its new Rockridge location at 5912 College Avenue — the former Box & Bells spot. The restaurant was a fixture in San Francisco since 1994, but its founders recently lost their lease at the Hotel California. As the Chronicle’s Jonathan Kauffman notes, high-end vegan (aka “plant-based”) cooking has changed a lot since the Nineties, and it will be interesting to see how chef Eric Tucker’s food evolves in the restaurant’s new East Bay digs.

2) Journalist and filmmaker James Boo has a new documentary out about Jodie’s Restaurant, the beloved and much-lamented greasy spoon, which shut down last year after prolonged difficulties with the health department. The film, “Nothing With Something: Death of a Diner,” takes its title after one of the tiny Albany institution’s many punnily-named breakfast specials. No word yet on Bay Area screenings of the film, but you can watch the trailer below — I got a little choked up by the end. Long live Jodie’s. May Jodie’s rise again.


3) In other, happier breakfast news: Tablehopper reports that Sequoia Diner (3719 MacArthur Blvd., Oakland) is officially open as of this past weekend. The restaurant aims to apply the Bay Area food scene's time-worn local/sustainable/seasonal cooking principles to breakfast foods.

4) Inside Scoop reports that Chowhaus (6118 Medau Pl., Oakland), the most high-profile restaurant to open in the Montclair neighborhood in recent memory, is open for business and serving breakfast, lunch, and — as of tomorrow — dinner.

6) If free ice cream is your thing, and you aren’t averse to long lines, here’s a relevant

news alert: The new Rockridge location of CREAM (6300 College Ave.), the Berkeley-based ice cream sandwich chain, is giving away free ice cream sandwiches all day for its grand opening on Saturday, June 6, from noon to midnight.

7) Newberry Market, Uptown Oakland’s forthcoming grocery store, announced that it has hired Shawn Walker-Smith — of the Oakland-based popup/wholesale business Tart Bakery — to head up its bakery and cafe. If you’re a fan of the scones sold at Oakland's Arbor Cafe, among other places, this is good news!

9) A16 Rockridge (5356 College Ave.) is running a special $35 prix-fixe menu this week to celebrate its second anniversary. The menu features dishes from the restaurant’s early days.