1) The Institute of Urban Homesteading is hosting its annual Urban Farm Tours in Oakland this Saturday, June 13 — always a fun, enlightening way to see urban gardening and animal husbandry as they’re being practiced in a variety of different scales and settings. Check out these tours if you want to learn about beekeeping, get inspiration for a drought-friendly graywater irrigation project, or just see a bunch of cute baby animals (see above). Tickets ($30 for adults, $18 for kids) are available via BrownPaperTickets.com and will give you access to eight different Oakland-based urban farms, whose exact addresses will be emailed to you after you’ve purchased your tickets.

2) Details are finally beginning to emerge about the long-awaited restaurant in Berkeley’s Elmwood neighborhood (at 2635 Ashby Ave.) from the owners of Comal, Inside Scoop reports. The restaurant will be called The Advocate — a nod to the name of the Elmwood neighborhood’s original newspaper, as well as to the city’s activist history, according to Berkeleyside Nosh. The chef will be St. Louis transplant John Griffiths, who will serve a California-inflected version of the cuisines of the southern Mediterranean and North African regions. The restaurant is expected to open in “mid-2015” — which is to say, soon. 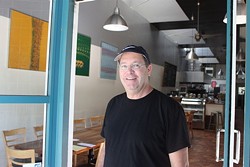 3) Eater reports that Kitchen 388 (388 Grand Ave., Oakland), the popular Adams Point neighborhood brunch spot, has closed abruptly after four years of business. In an email, owner Joseph Dunbar told me he decided to sell Kitchen 388 for the sake of his health — in fact, health issues were the reason he’d temporarily closed the business for several months back in 2012. Now, Dunbar will go back to the private chef work that he did before opening the restaurant.

For longtime customers, there’s a silver lining: Dunbar has sold the restaurant to an established (but yet unnamed) San Francisco restaurateur who will keep the Kitchen 388 name, along with all of the original menu items and recipes. I’ll post an update once I have a sense of a timeline for the restaurant’s reopening and details about any changes.

4) In the aftermath of Blue Bottle Coffee’s announced pull-out from its popular and surely lucrative booths at Bay Area farmers’ markets (have you seen those lines?), Berkeleyside Nosh reports that two East Bay roasters — Highwire Coffee Roasters and Red Bay Coffee — are vying to take over the spot at the downtown Berkeley Saturday farmers’ market. Is there a bad choice? Highwire has gotten plenty of love from the Express, and Red Bay was the subject of this week’s story about “Oakland’s Most Radical Coffee Shop.” The Berkeley-based Ecology Center, which organizes the market, is expected to announce its decision shortly.

5) Uptown’s Sweet Bar Bakery (2355 Broadway, Oakland) has launched a Sunday brunch menu, which owner Mani Niall said he hopes to eventually extend to the entire weekend, and then the rest of the week. Notable menu items include assorted breakfast pizzas, baked eggs, and challah French toast. On a related note, Niall told me that he has started experimenting with doughnuts — including one with a sour cherry bourbon glaze, and another with maple pepper-bacon. These, too, will be a recurring special on Sundays.

6) Kainbigan (2101 14th Ave.), a Filipino restaurant in East Oakland, will open a second location in West Oakland, Berkeleyside Nosh reports. Kainbigan will take over the former Brothers’ Kitchen spot at 3000 San Pablo Avenue and will feature a new breakfast/brunch menu — including a champagne brunch on Sundays.

7) There will be a benefit concert at the Afrika Town community garden in West Oakland on Sunday, June 14, starting at 2 p.m.. As previously reported, activists reached a temporary truce with the owner of the vacant lot at the intersection of San Pablo and West Grand avenues, where guerrilla gardeners have been growing fresh fruits and vegetables and giving the food away. That said, it’s unclear whether the garden’s organizers have gotten any closer to raising the roughly $995,000 that they would need to purchase the property outright. Sunday’s “Fist Up” concert will feature performances by Ngaire, Felix Lee, Womyn’s Creative Collective, and Micah.

8) COOK!, a kids’ cooking camp in Emeryville that I wrote about last year, has spots available in a few sessions that are starting soon — Pickles, Preserves, & Fermentation (June 22-26, for ages 13-16); Gluten-Free Desserts (June 22-26, ages 11-15); and a “Family Dinner” class (June 29-July 3, ages 9-12 and 13-16) wherein kids cook dinner for their entire family each night. You can check out the full lineup and course descriptions here. Financial aid (to cover up to 50 percent of the cost) is available for qualifying families.

9) Finally, ICYMI, I wrote about five restaurants you should visit while Cal students are on break, and Iyasare’s Japanese chef will serve Cal cuisine at his new restaurant next door.