Mid-Week Menu: The Wolf Is Open, Encuentro Is Closed, and Cholita Linda Is Coming to Alameda

1) Fans of Bay Wolf and Wood Tavern — one of Bay Wolf’s spiritual descendents — have been waiting with bated breath since the news dropped that Rich and Rebekah Wood were taking over the space formerly occupied by the iconic Cal-cuisine restaurant. The wait is finally over: The Wolf (3853 Piedmont Ave., Oakland) opens today, February 8, Berkeleyside Nosh reports.

Bay Wolf co-founder Michael Wild, who is friends with the Woods, told the Chronicle that the newly remodeled space is “pretty much the same but completely different,” with a modern open kitchen being one of the key additions. But the gorgeous patio is still there, and chef Yang Peng’s menu includes several nods to Bay Wolf classics — the seared duck breast, for instance. You can check out The Wolf's entire menu here.

2) A reader tipped us off that Dan Nang Krungthep/Muang Thai (905 San Pablo Ave., Albany), one of the better Thai restaurants in the Albany/Berkeley area, has closed suddenly after getting evicted from the space. Reached by phone, chef-owner Charlie Khamruang told What the Fork that after his lease ran out, the building owner wanted to double his rent. Khamruang said he has talked to a lawyer to see if he has any legal recourse. In the meantime, the restaurant has been closed for business since last week.

3) Also closed suddenly last week: Encuentro (550 2nd St., Oakland), the popular upscale vegetarian spot in the Jack London District. According to a statement from the owners posted on the restaurant’s website, “The rising costs of doing business in an economy that is fraught with uncertainty has become overwhelmingly difficult. We love you and will miss you terribly but we have to think with our heads and not with our hearts.” Eater reports that the restaurant has planned a couple of cash-only farewell pop-up events at the space. One featuring a “new creative menu” will take place on Friday, February 10, 5–9 p.m.

4) After a frustrating and ultimately failed attempt to expand to Lakeshore Avenue, it looks like Cholita Linda will be adding a second location after all: Berkeleyside Nosh reports that the owners have signed a lease on the former Flavors of India spot at 1337 Park Street in Alameda. 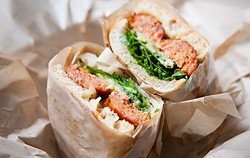 8) ICYMI, the Cambodian noodle pop-up Nyum Bai is doing a long-term residency at the Emeryville Public Market, and Javier Sandes, the Oakland-based empanada maestro, is taking over the kitchen at a Hayward dive bar.

Plus, the Express’s beer issue is out just in time for SF Beer Week. Check out all our related beer coverage here.