1) Good news for barbecue aficionados: The East Oakland brisket-and-ribs joint Genny’s BBQ (6637 Bancroft Ave.) is back in business after a fire shut the restaurant down last year. Owner Virginia Roberson told What the Fork that the menu is the same as before, though she’s added a few new sandwich options, including a barbecue brisket po’boy and a fried catfish po’boy. Hours are Wednesday to Sunday, 12 p.m.-8 p.m. As a reopening special, for the entire month of April customers will get a free pastry or soda with any order.

2) It looks like KronnerBurger owner Chris Kronner may have revealed the as-of-yet-unannounced location of his new Oakland brick-and-mortar digs during a pop-up event last week. If the image on the cards he was passing out (a photo of which was posted on Chowhound) is taken at face value, it appears that KronnerBurger will take over the long-shuttered J’s Mexican and American Food spot (4063 Piedmont Ave.) — a historic Piedmont Avenue building that formerly housed a Key Line trolley station. We reached out to Kronner for confirmation, but he’s staying mum for the time being. In the meantime, Kronner continues to do pop-up dinners at the Ordinaire Wine Bar a couple nights a week.

3) A quick update to our earlier report on Tanjia’s reboot as Doukkala (4905 Telegraph Ave.), a Cal-Moroccan restaurant: It seems like the change was motivated at least in part by the fact that the restaurant’s founder and original chef, Said Zahid, recently got married and moved back to Morocco. Purnima Khandhadai, the restaurant’s general manager, told What the Fork that the new chef is Eric Lanvert, a French chef who most recently was the chef-owner of San Francisco’s Rue Saint Jacques. (Lanvert was also previously attached to the Oasis Food Market’s Grand Avenue project, whose progress appears to have stalled in recent months. ETA: Lanvert contacted us to clarify that he never actually worked for Oasis Lounge.)

4) A restaurant called Longbranch Saloon is coming to the former Sea Salt location at 2512 San Pablo Avenue in West Berkeley, most recently occupied by the short-lived Eat & Lounge, Berkeleyside reports. No other details are available yet, but a little sleuthing revealed that the name listed on the public notice is Hal Brandel, one of the owners of Bar Cesar, Fonda, and Caffe Trieste.

5) Inside Scoop reports that a branch of Best Lil’ Porkhouse, a San Rafael-based barbecue restaurant that specializes in humanely raised meats, is coming to Alameda’s South Shore Center. Look for a fall opening.

6) Downtown Oakland’s Tribune Tavern (401 13th St.) is celebrating its first anniversary on Thursday, April 10, starting at 5 p.m. There will be music courtesy of three DJs, $1 “Guilty Fries,” and drink specials — and, as a nod toward the Tribune Tower’s history as a gathering place for journalists (and definitely not a play for some positive press), the first fifty reporters/members of the media who arrive will get a free cocktail.

7) Blue Bottle Coffee, a growing behemoth in the high-end coffee world, keeps making moves. The Oakland-based roastery’s latest play includes the acquisition of the Los Angeles cafe and roasting company Handsome Coffee Roasters (as Eater reports) and the online coffee subscription service Tonx (in a deal detailed by Wired). The upshot: Blue Bottle now has its first (already fully staffed) cafe and roasting facility in Los Angeles, and is positioned to have a much stronger online presence. Look out, world. 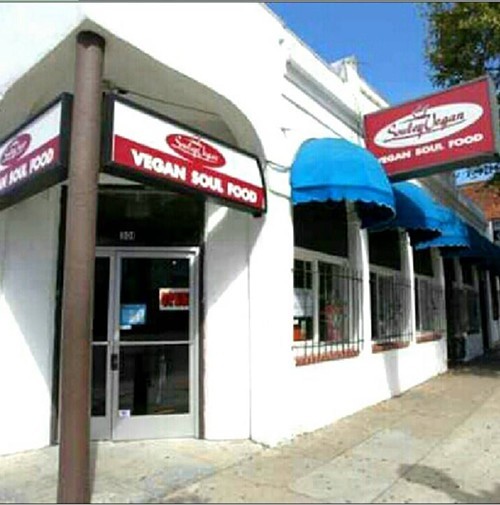 8) The Chronicle has a nice piece on the history of the building that houses Oakland’s Souley Vegan (301 Broadway). The white “simplified Italianate” dates back to 1857 and is said to be the oldest building in Oakland.

9) Big ups to the tastemakers at Umami Mart for turning me onto my new favorite TV show: Kodoku Gurume (“The Solitary Gourmet”), a Japanese series that’s based on a manga by Jiro Taniguchi and Masayuki Kusumi. In each episode, a salesman named Goro travels to a different neighborhood in Tokyo, is suddenly stricken with extreme hunger, finds a restaurant, and then proceeds to eat with great relish. That’s the whole show! But the restaurants are all real places in Tokyo, and the food looks delicious. And I cannot emphasize enough the relish with which Goro eats, and the pleasure that this brings me.

10) Finally, ICYMI, The CRO Cafe is reopening on Friday in a larger space in Temescal Alley, and a tiny market in North Oakland is a good source for Jamaican patties served hot from the oven.