The restaurant has been serving lunch only to start, Monday to Saturday from 11:30 a.m. to 2 p.m. — mostly rice bowls, plus gaburi sushi (uncut, burrito-like hand rolls). Owner Chikara Ono said he’ll roll out dinner service with a limited menu from 5 to 10 p.m., starting this Thursday. According to Ono, the restaurant’s official opening date will be Friday, October 10, at which time the dinner menu will expand. Eventually he’ll bring back many of the customer favorites from the old B-Dama: charcoal-grilled meats, ramen, and so forth.

One more thing: Ono said the new spot will be called AS B-Dama — or “As B-Dama” (he hadn’t decided yet on the capitalization) — after the first-name initials of his two chefs, Asuka Nadeshiko and Shin Okamoto.

2) Earlier this year we told you about the insanely popular Temescal brunch spot Aunt Mary’s Cafe’s impending move to a new location down the street, at 4640 Telegraph Avenue. Inside Scoop reports that that move took place this week. The restaurant was initially aiming to open its new digs by today, but based on an update on the restaurant’s website, it sounds like the reopening will be pushed by a few days at least.

3) Berkeleyside Nosh reports that developers are planning a fairly massive renovation project for Spenger’s Fish Grotto (1919 Fourth St., Berkeley). The proposed project includes a beer garden, several new retail shops, and a scaled-down version of the restaurant. According to the developers, the idea is to drive more foot traffic to Spenger’s, and to that stretch of Fourth Street in general.

4) Lush Gelato’s location at 1817 Polk Street in San Francisco softly opens today. The new shop is the East Bay favorite son’s first westward expansion. Among other features, the Polk Street gelateria will have an open kitchen, where customers will be able to watch owner Federico Murtagh (whom I once dubbed the “mad scientist of gelato”) working his magic.

5) Jumping on the Oakland-wide trend of sit-down restaurants that double as coffee shops, A16 Rockridge (5356 College Ave.) launched daytime cafe service this week, Inside Scoop reports. Daytime offerings will include assorted house-made pastries, scaccia (a stuffed flatbread), and a full selection of wood-fired pizzas. 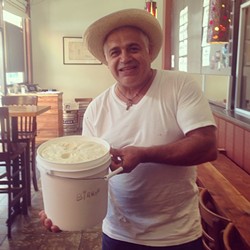 7) The Half Orange (3340 E. 12th St., Ste. 11, Oakland) — the sausage-sandwich shop, burger joint, and maker of elaborate topped fries — is hosting a wine party with Los Pilares, a San Diego-based maker of natural wines, on Thursday, October 9, starting at 6 p.m. Also of note (and booze-related): Owner Jay Porter tells me that The Half Orange is serving a hoppy ice cream made with Ale Industries’ “Uncle Jesse” session ale, courtesy of the great Nieves Cinco de Mayo, for at least a few more days.

9) As we head toward peak apple season here in the Bay Area, this Atlantic story about the awful reign of the Red Delicious apple — arguably the best-looking, but worst-tasting, apple to ever to run rampant in the produce aisles of American grocery stores — is well worth a read.

Plus, don’t miss the wealth of food stories in this week’s special Taste issue of the Express: meat shakes and fried chicken lollipops, restaurants that offer an antidote to gentrification, the return of the tiki drink, and much more.