Mid-Week Menu: The Hog’s Apothecary Is Open, a Taiwanese Noodle Shop Is Coming to Uptown, and Chef Shuffles at Plum and Haven

1) After months of anticipation, Hog’s Apothecary (375 40th St.) quietly opened on Monday, according to early reports on Twitter, Yelp, and beyond. After we previewed the North Oakland sausage-and-beer joint earlier this year, co-owners John Streit and Bradford Earle upped the ante by hiring Sayre Piotrkowski, a certified cicerone (i.e. beer service’s version of a sommelier), to run their beer program. At last count, Hog’s Apothecary has got at least 33 beers on tap, to go along with a selection of housemade sausages and other beer-friendly foods. No official word yet on whether Streit and Earle will be able to keep food prices as low as they’d initially planned (with most items under $10). 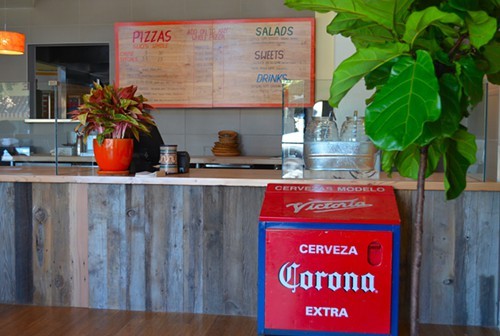 2) Also open this week is Oakland’s Slicer Pizzeria (4395 Piedmont Ave., Unit A), which has taken over the former Local Cafe spot next door to Adesso. Chef Colin Etezadi (Boot and Shoe Service) said Slicer will be mostly a takeout slice shop, but there are about twenty seats for dine-in customers, and Etezadi will be serving whole pies, salads, and cold beer as well. Tomorrow, September 12, will be the pizzeria’s first day of business.

3) It looks like Oakland will be getting its first bona-fide Taiwanese restaurant. Diablo Dish reports that Pi Dan Noodle House is tentatively slated to open this coming spring at the intersection of Grand Avenue and Broadway. Specialties will include Taiwanese-style beef noodle soup and zha jiang mian — noodles topped with a bolognese-like sauce made with ground meat and fermented black beans. The food of my peoples! Owner Allison Chen said she plans to keep the prices low ($7-$10 a dish), but wants to create a more pleasant, modern space than your typical Chinese hole in the wall.

4) Changes are afoot at Daniel Patterson’s pair of high-profile Oakland restaurants. Inside Scoop reports that Kim Alter, the chef at Haven (44 Webster St.), will take over as the new chef at Plum (2214 Broadway) on September 16. Plum will be closed in the interim (though Plum Bar will remain open). No official word on the reason for outgoing chef Manfred Wrembel’s departure. Meanwhile, Chris Johnson, recently the sous chef at Patterson’s flagship restaurant Coi, will take over as Haven’s executive chef.

Plum, for its part, continues to have a notably high chef turnover rate for such a well-known restaurant: In the three years since the restaurant opened, its kitchen has been helmed by seven different chefs: Jeremy Fox, Lauren Kiino, Ron Boyd (the director of operations for what Patterson is now calling the DPG restaurant group), Charlie Parker, Rob Dort, Wrembel, and now Alter. We’ll see if Alter, who has been at Haven from the beginning, can bring some stability to the first (and, arguably, more widely lauded) of Patterson’s two East Bay outposts. According to Inside Scoop, planned changes include the addition of a tasting menu option (five courses for $65), which has been one of Alter's signatures at Haven.

5) One more tidbit of Oakland chef news: Inside Scoop reports that James Syhabout has hired a new chef de cuisine at Commis (3859 Piedmont Ave.) — Aaron Martinez, who most recently worked as the sous chef at San Francisco’s Quince.

6) Zagat notes that Oakland will be getting a new coffee roastery and cafe called Jewel Box Coffee Roasters, a collaboration between Roast Co. head roaster Brad Joyce and Pizzaiolo bar manager Kate August. The pair are fresh off a successful Kickstarter campaign that netted over $16,000, but with a full build-out still to come, it sounds like Jewel Box won’t be ready to open until next summer. 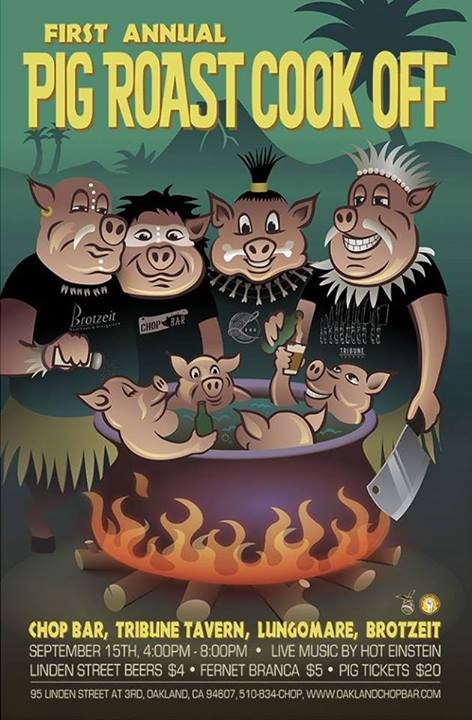 8) Many of you are already aware of the pig roasts that Chop Bar (247 4th St., Oakland) puts together during the summer months, usually held at Linden Street Brewery (95 Linden St.) — I wrote about the porcine feasts a couple of years ago. Now, for the first time, a competitive element will be formally added: The First Annual Pig Roast Cook-Off will take place at the brewery this Sunday, September 15, from 4 to 8 p.m. Chefs Lev Delany (Chop Bar, Brotzeit Lokal), Huw Thornton (Tribune Tavern), Craig DiFonzo (Lungomare), and Chris Pastena (co-owner of all of the aforementioned restaurants except Brotzeit) will each roast a different breed of pig, with each chef bringing his own style and technique to the endeavor. A $20 ticket buys a taste of all four pigs plus assorted sides; each pig eater also gets a vote to help crown this year’s champion.

10) Finally, ICYMI, What the Fork got to taste the East Bay’s first faux cronuts and sampled the sweet-and-salty delights at Oakland’s new Chicago-style popcorn shop.