Mid-Week Menu: Perdition Smokehouse’s Opening, a Lawsuit to Halt Comal’s Elmwood Spin-Off, and Restaurants Where You Can Watch the World Cup

1) This week’s high-profile restaurant opening is Downtown Berkeley’s Perdition Smokehouse (2050 University Ave.), which, after a brief delay, has announced that its first day of business will be Friday, June 20. According to Inside Scoop, the Texas-style barbecue joint from The Trappist’s Chuck Stilphen and Mikkeller Bar chef Mike O’Brien will open with a streamlined dinner menu — hush puppies, chile verde, five kinds of meat (brisket, pork shoulder, pork ribs, turkey breast, and hot links), five side dishes, and three sandwich options. Initial opening hours will be 5 p.m. to midnight.

2) A group of Elmwood residents has filed a lawsuit to stop the owners of Comal from opening the Cal-cuisine restaurant that they’re planning for a 3,200-square-foot space at 2635 Ashby Avenue, Berkeleyside Nosh reports. The crux of the opposition appears to be concerns about the restaurant’s impact on noise and parking in the neighborhood. Owners John Paluska and Andrew Hoffman told Nosh that they are moving forward with their plans, with the hope that the suit will be settled by the time they’re ready to begin construction. 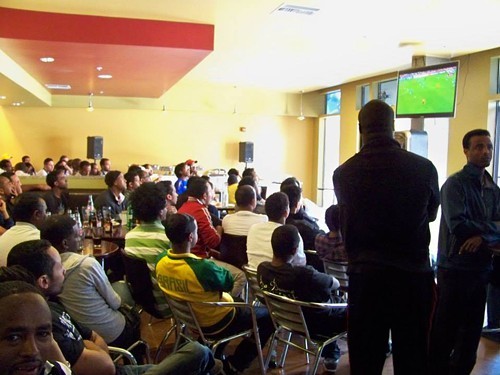 3) Is the World Cup cutting into your productivity? You might as well embrace the fact that you’re not going to get any work done and head to one of the many East Bay restaurants and bars that are hosting World Cup viewing parties, formal and informal, on screens large and small. Inside Scoop has a rundown of eight East Bay spots that are screening all 64 matches (including What the Fork’s earlier rec, Adesso). Berkeleyside Nosh has a longer list of Berkeley restaurants and bars that will have at least some of the games on — the new Westbrae Biergarten seems like an intriguing option, especially if you’re pulling for Brazil.

4) Regulars at Nido (444 Oak St., Oakland) recently welcomed back a familiar face: chef Jose Ramos, who worked at the restaurant when it first opened, has returned after a stint at Sabrosa in San Francisco. Inside Scoop reports that Ramos is looking for investors to help him open his own place, but in the meantime he’s helping Nido chef-owner Silvia McCollow with menu development, introducing more regional Mexican dishes — Oaxacan black mole with duck, for example. 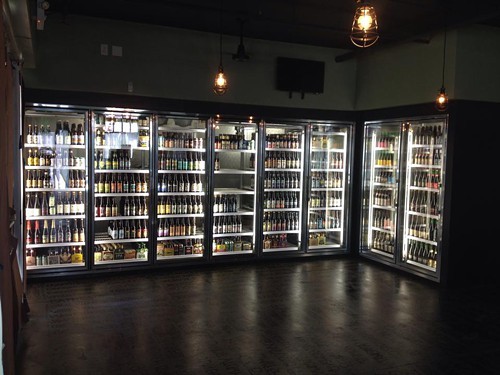 5) The Good Hop Bottle Shop (2421 Telegraph Ave.), Oakland’s latest beer-centric taproom and bottle shop, is now open, Tablehopper reports. The Uptown spot has 16 mostly-local beers available on tap and a vast, infinitely impressive reach-in cooler/“Wall of Beer” that features some 600 bottled and canned beers, including some that are fairly obscure and hard to find elsewhere.

6) Just in case you thought there weren’t enough food-delivery startups cropping up in the East Bay, here’s one more: Postmates has launched East Bay service, offering on-demand delivery from retail stores and restaurants, Inside Scoop notes. Since the Postmates drivers simply act as couriers, picking up your order in your stead, that opens your food-delivery prospects up to almost every restaurant — within the delivery zone — that accepts takeout orders. As a recent Postmates press release put it, “This means mac and cheese from Homeroom delivered to The Greek Theater, Pizzaiolo brought to Lake Merritt, and fresh produce from Berkeley Bowl without waiting in line.” Delivery fees usually start at $5, but as a special introductory promotion, the company is offering free East Bay delivery for the month of June.

7) It has been two years since Hopscotch (1915 San Pablo Ave., Oakland) opened with its unique blend of Japanese-inspired California cuisine and a retro Fifties’ diner setting. To celebrate its two-year anniversary, this week the Uptown Oakland restaurant is serving a family-style prix-fixe menu priced at $80 for two. On the menu: kanpachi tiradito, fried okra, a 20-ounce veal chop, a celery-root croquette, and yuzu meringue pie.

8) Also celebrating an anniversary in Uptown Oakland is Farley’s East (33 Grand Ave.), which turns five on Wednesday, June 18. Stop by the parklet in front of the cafe between noon and 2 p.m. for live music, giveaway bags, and free samples of De La Paz iced coffee and Five Mountains Tea iced tea.

9) FuseBOX (2311 Magnolia St., Oakland) is hosting a neat series in its front courtyard this summer: On Saturdays, from 4-5:30 p.m., the restaurant will host the “LowRider Bicycle Kitchen Cart: CounterRevolutionaria,” a pedal-operated mobile food cart created by Robert Karimi (aka The People’s Cook) as a way to combine food and the creative arts in order to bring people together. The series kicks off this Saturday, June 21, with a performance by magician David Hirata, who will test out new material for his food-themed magic show, “The Philosopher’s Stew,” and share some food — probably rice balls or Japanese pickles — with the audience. FuseBOX’s regular happy hour menu will also be available during the performance.

10) Finally, ICYMI, PieTisserie has landed a brick-and-mortar shop in Oakland, B-Dama’s new location in Swan’s Marketplace should open next month, and UC Berkeley oral historians look to tell the history of the West Coast cocktail.