Mid-Week Menu: Oliveto Does Toast, Rockridge Gets an ‘Improvement Club,’ and Casa Cubana Rebrands as a Steakhouse

1) Has it already been two or three years since Four Dollar Toast became the Bay Area’s phony food controversy du jour? Yet here we are in the year 2016, and the various permutations of artisanal toast that are available at East Bay restaurants and cafes remain as popular as ever — often for good reason. Oliveto’s downstairs cafe (5655 College Ave., Oakland) is the latest contender to jump into the fray. Last week the restaurant launched morning “toast service,” 8–11 a.m. daily. The initial features a choice between two different house-baked whole-grain breads — a plain pullman loaf and a seeded loaf with raisins — for $3 a slice. Once you add your choice of jams, butters, and savory spreads, the total price jumps up to the $4–$5 range.

For this week only, Oliveto is offering a free espresso drink — made with the restaurant’s new automated espresso machine — with every order of toast.

2) An early contender for the least tactful bar or restaurant name of the year, the "Rockridge Improvement Club" (5515 College Ave., Oakland) has replaced dive bar Ye Olde Hut, Inside Scoop reports. There’s a story behind the name — co-owner Jeff Saltzman told Inside Scoop that the building used to be home to a pro-Prohibition group by that name. But … yeah. In any case, this looks to be your prototypical craft cocktail bar.

3) Berkeleyside Nosh has a nice story about Chop Plentil, an African food delivery service and occasional pop-up based in Oakland. 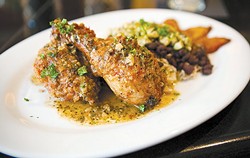 4) The short-lived Casa Cubana (59 Grand Ave., Oakland) has reopened as a new branch of the San Francisco-based Izzy’s Steaks & Chops. The restaurant was owned by the same folks who run Izzy’s anyway. Back in February, I gave Casa Cubana’s fusion-y Cuban cuisine a somewhat middling review.

6) Finally, ICYMI, I talked to Eddie Huang about his new memoir, gentrification, ethnic cooking, and the importance of real neighborhood restaurants.