1) Fast food lovers, take note: In side Scoop reports that LocoL, the high-profile fast-food collaboration from star chefs Roy Choi (the L.A. street food king) and the Bay Area’s Daniel Patterson, will open its first Bay Area location on Wednesday, May 25 — in the old Plum spot at 2214 Broadway in Uptown Oakland.

You may recall from our earlier coverage that the guiding principle at LocoL is to serve high-quality burgers, rice bowls, quesadillas ("foldies"), and other items meant to satisfy people’s fast-food cravings at an affordable price point. Most menu items are $5 or less, and most of the chain's locations will target so-called food deserts — though the Uptown location obviously doesn’t exactly fit that mold. Choi and Patterson reportedly have another location in deep East Oakland in the works. 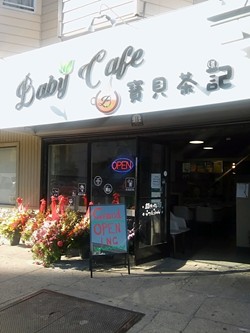 2) An intrepid tipster clued us into a new restaurant in Oakland Chinatown called Baby Cafe (358 11th St.). No, it isn’t that kind of baby cafe: Rather, the cafe replaces Yummy Guide, the Hong Kong-style cafe that used to occupy this location. And, at least based on initial Yelp reports, not too much has changed apart from an update to the design and decor.

4) Inside Scoop reports that the downtown Berkeley location of the Ike’s sandwich chain is now open for business at 2172 Shattuck Avenue.

5) Heat Hot Sauce Shop (1922B MLK, Jr. Way), one of my favorite specialty food shops in the East Bay, is searching for a new location, Berkeleyside Nosh reports. Apparently, the store’s current digs don’t have enough storage space to support the vibrant online-sales component of the business.