1) Following on the heels of yesterday’s news about Brotzeit Lokal, here is another sausage-and-beer-related item: Temescal’s Hog’s Apothecary (375 40th St.), which we previewed earlier this year, is in the final stretch of an ambitious $20,000 Indiegogo crowdfunding campaign that owners Bradford Earle and John Streit hope will pay for the finishing touches on the beer hall and restaurant. As of this posting, with six days left in the campaign, they’re a little more than halfway to their goal. Among the perks being offered to top-tier contributors: Free. Beer. For. The. Rest. Of. Your. Life. (There’s some fine print, but yes, you read that right.)

2) In somewhat related news, Berkeleyside Nosh reports that plans for the Gilman Biergarten, a food truck and beer garden in West Berkeley, have been approved. The owners are aiming for a late July opening, and they’re currently vetting candidates to fill out their roster of food trucks. 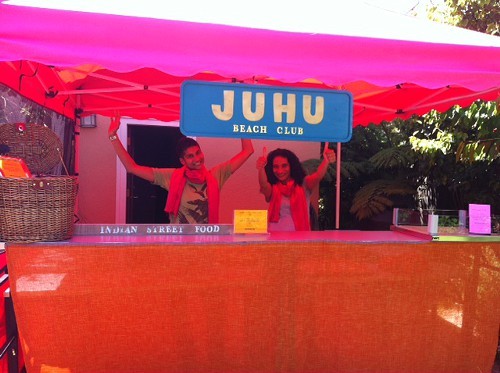 3) When I reviewed Juhu Beach Club (5179 Telegraph Ave., Oakland) a couple of months ago, my only complaint (if you could call it that) was that it felt a bit odd to be eating such vibrant Indian street food dishes while sitting down — it’s street food! Well, it turns out chef Preeti Mistry’s food will be hitting the streets after all, so to speak. JBC will make its first appearance at Bites Off Broadway (365 45th St., Oakland) on Friday, June 7, from 5:30 to 8:30 p.m. Mistry expects to set up her bright pink tent at the weekly food truck gathering every other Friday throughout the summer. She’ll start with a small, simple menu and expand from there. This Friday’s offerings: Uncle’s Chicken Curry Tacos (an old favorite from Mistry’s Mission district pop-up days), Desi Jacks (an Indian twist on Cracker Jacks), one or two lassis and coolers, and possibly a kid-friendly grilled cheese pav. Eat ’em standing up!

4) According to Tablehopper, the bakery Fournée (2912 Domingo Ave.) is now open in Berkeley, in the former Bread Garden location. The menu is mostly classic French breads and pastries, with coffee and pizza coming soon. Berkeleyside Nosh has an opening day report, with photos of some of baker-owner Frank Sally’s handiwork.

5) Hive (2139 Macarthur Blvd.), a new coffee shop in the Oakland’s Dimond district, has also opened, according to East Bay Dish. The cafe serves Highwire coffee and tea, and, yes, there’s a bee theme: Honey is a prominent ingredient in many of the food and drink offerings.

6) Gene Anderson, of Our Oakland, has a fresh tip on a new Filipino street food restaurant near the Fruitvale BART station. A little further digging revealed that the name of the place is Lucky 37 Filipino (2868 Fruitvale Ave., Oakland), and it sounds like the restaurant is doing mostly takeout business during its soft opening phase. Look for an official opening and a finalized menu sometime in the next few weeks.

7) To celebrate National Donut Day, Berkeley’s Pyramid Alehouse (901 Gilman St.) is sponsoring a free donut eating contest on Friday, June 7, at 5:30 p.m. What are you waiting for, glutton? Granted, this is more a test of dexterity than endurance, as each contestant only gets to eat one donut (or as much of it as possible) — the catch being that said donut is attached to a string, and you can’t use your hands. Winner gets a dozen bottles of Pyramid beer and a dozen beer-infused donuts. The first thirteen people to sign up on the event’s Facebook page will get a shot at glory. As of late Tuesday night, only one brave individual had thrown her hat in the ring. I’ll ask again: What are you waiting for, glutton? Donut burgers, more of those beer-infused donuts, and (of course) beer will be available for purchase. (h/t FunCheapSF)

8) Berkeleyside Nosh notes that this Sunday, June 9, is Love Our Lake Day for Oakland’s Lake Merritt neighborhood: Three miles of streets going around the lake will be closed to car traffic from 11 a.m. to 4 p.m. Food trucks will be stationed at various spots (see the map) and, according to Nosh, will include such homegrown favorites as Tina Tamale, Fist of Flour, Doc’s of the Bay, Liba Falafel, Roderick’s BBQ, Tante’s, Beulah’s Bean Truck, Fivetenburger, and Annakoot.

9) In case you missed it, this week What the Fork previewed a new sausage-and-beer joint on the Oakland waterfront and talked to the organizers of the Culinary Addicts, a cooking club that’s currently strutting its stuff at Guest Chef.