1) Grand Fare (3265 Grand Ave., Oakland) has closed suddenly just three months after reopening, Eater reports. Sound like deja vu? That’s because the same thing happened to the first incarnation of the food hall/restaurant/prepared foods market hybrid, except the first time around, it went dark after just six weeks — a few days before my review was scheduled to drop, it turned out. This time the closure will be permanent.

From the start, the project was nothing if not ambitious, with its spit-roasted chickens, ice cream truck, raw bar, and tree-lined garden courtyard. When I spoke to owner Doug Washington shortly before the reboot, he was confident that he’d figured how to make it work, but it appears that the relatively minor changes — a streamlined approach to ordering, a somewhat simplified menu, the addition of indoor seating, and the nixing of that ice cream truck — couldn’t solve the puzzle of the restaurant’s long-term financial sustainability. Washington and co-owner Freya Powe (Washington’s wife) are now seeking a new tenant to take over their lease. Powe’s flower shop on-site, which operates on a different lease, will remain open.

2) In similar news, Claremont Diner (6200 Claremont Ave., Oakland) — which had just reopened earlier this year under new ownership — has closed once again. No official word yet on what will happen to the space, though rumor has it that a sushi spot might be in the works. 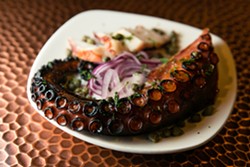 3) Berkeleyside Nosh reports that Pathos (2430 Shattuck Ave., Berkeley) — probably the East Bay’s most ambitious Greek restaurant — is closed, at least temporarily, due to a dispute with the landlord.

4) Alameda-based Julie’s Coffee and Tea will open a second location in the former Nick and Aron’s spot (4316 Telegraph Ave., Oakland) in Temescal, Berkeleyside Nosh reports. I don’t put much credence into talk of “cursed” restaurant locations, but suffice it to say that this is a spot that has seen a lot of turnover in the past few years, going back to its Remedy coffeeshop days. Here’s to hoping the new cafe sticks.

5) The Andronico’s local grocery store chain has been purchased by Safeway, the Chronicle reports.

6) Sobremesa, the Berkeley-based Spanish popup restaurant and itinerant cooking school that I’ve written about before, is now organizing food-centric tours of Barcelona and Basque Country. Check them out if you have interest (and the necessary budget!).

7) Here is a food- and beer-focused Election Day event that sounds pretty great.

8) Finally, ICYMI, I wrote about my latest Oakland Chinatown finds.